The Best Movie For A Cold February Day

It’s one of my all-time favorite movies. But I’m not alone. In 2006 this movie was added to the National Film Registry, which recognizes movies that are deemed “culturally, historically or aesthetically pleasing”. Renowned religious philosophers have cited this movie as one of the most spiritual movies ever created. it’s been selected as one of the top ten best comedies ever, and literary critic Stanley Fish added it to his list of top ten movies ever; Roger Ebert added it to his “Great Movies” series. Personally speaking, this movie honestly changed my own life. Because of this movie, I began to write my sequel to “Ben-Hur”. And taught myself a little piano as well. I’m talking of course about the movie…“Groundhog Day”.

The other day as I was perusing old journals, I came across the entry that I wrote after seeing “GD” and thought it would be fun to share it now. If you haven’t seen this movie in awhile, or ever, then now’s as good a time as any as we find ourselves stuck in a frozen time loop called February.

February 15, 1993 – You blink and ten days are gone. The passage of time can be that fast. Last night we saw an interesting film – “Groundhog Day”, interestingly enough about the passage of time. Bill Murray plays a weather forecaster who keeps waking up on February 2. It’s a type of “Beauty and the Beast” curse that is fallen on him. The spell of déjà vu is not broken until he wins the love of a virtuous woman, which is difficult for this gruff, self-centered jerk.

Murray’s character is able to carry over his awareness and experience from the preceding day allowing for him to not only develop compassion, but acquire numerous other skills from ice carving to piano-playing to 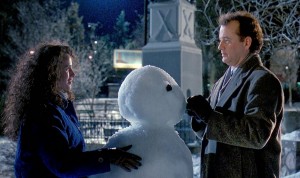 reciting French poetry. You could say he picks up a liberal arts degree in a single day. Despite the more obvious lessons of the film – that time should be spent helping others, that love triumphs over loss – there is an even deeper message that appeals to me.

For most people, the passage of time is like living the same day over and over again. Nothing ever changes about them. They sleep, work, eat and play with little variation on the same old theme. Most of the skills and abilities and interests we possess are in our back pockets before were 25, and the rest of our lives are spent replaying the tape with little spontaneity or growth till it’s all over. The challenge before us is to seize the day (who said that first, I wonder?) To not let time wash over us like a wave but to corral time, channel it and milk it of what it has to offer.

I don’t want my future to be measured by who and what I am now, pastoring a small country church in rural Minnesota. I love our people but I do not want this to be all there is. Neither do I want my life to be a succession of ever-expanding pastorates. I want to grow in my other interests, yes, play piano, become an expert in American political theory and history, and use my writing skills to publish my ideas in fiction and essay formats. I want to be a pastor because of the joy of ministry, not because of a paycheck. I never want to stagnate. I envy Bill Murray’s character in a way. What he accomplished in a day will take me a lifetime. At least I, like him, have the eyes to see the potential in the calendar.

Not bad thinking for 30, eh? Well, how about you? How are you using the gift of time you’ve been given? What dreams do you have for 2016? What steps will you take to bring them closer? Snap out of it, my friend. Break that time-loop you’re stuck in. Cast your bread on the water, as the Bible says, and see what comes of it. Take a shot.