Scully and Mulder Should Investigate This

Now that the X-Files reboot is over (so disappointing!) let’s talk about something that would really have Scully and Mulder scrambling to explain: biblical prophecy.

Did you know that the Bible is chock-full of predictive prophecy? No other religion offers prophecy to the world as proof of its truthfulness. Christianity does. Sometimes Christians forget what a powerful thing this is to have in their corner. It’s like trying to get a loan, and when the bank asks what you have for collateral, you say, “All I’ve got is a brand new Lamborghini sitting in the garage that I inherited from my folks. Is that worth anything?” Prophecy is that powerful an asset to our witnessing.

Why did God put prophecy in the Bible? There are two primary reasons. First of to convict unbelievers.

A lot of movies in recent years have gotten great mileage out of the idea of prophecy in their stories. In “The Matrix” Neo was ‘the One’ foretold. The Harry Potter saga was driven along by prophecy. “The one with the power to vanquish the Dark Lord would be born as the seventh month dies…”.  But no one stops for a moment to ponder the implications of the existence of true prophecy. For prophecy to really exist would mean there must be an overarching supernatural power above time that is guiding things along. Prophecy is a great, big, screaming laser pointing right toward God.

God himself – speaking through the prophet Isaiah – gives the rationale for prophecy. “For I knew how stubborn you were: the sinews of your neck were iron, your forehead was bronze. Therefore I told you these things long ago, before they happened I announced them to you, so that you could not say, “My idols did them, my wooden image and metal god ordained them.’ You have heard these things, look at them all! Will you not admit them?” (Isaiah 49:4).

Prophecy adds the wow factor to the Bible. Jesus in trying to convince skeptical people that he was in fact the promised Messiah appealed to prophecy. He came, mind you, with some impressive credentials. He was sinless. He spoke like no one ever spoke before. He did miracles. He pointed out each of those things to people. He pulled out all the stops, including prophecy. John 5:46 – “If you believed Moses, you would believe me for he wrote about me.”

A second reason why God inserted prophecy in his Word was to console believers. On the first Easter, Jesus appears beside two disciples along the road to a village called Emmaus. But they don’t recognize him at first. Moping along like Eeyore, they tell Jesus about the arrest and crucifixion of their Lord. And then they add, “This morning some women came to us and told us they saw an angel who told them that Jesus was 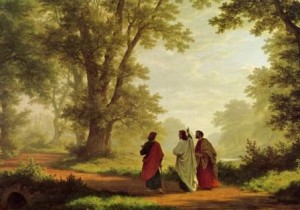 alive, and they found the tomb empty but him they did not see.”

At this, Jesus has had it with their whining.  He turns to them and says, “How foolish you are, and how slow of heart to believe all that the prophets have spoken!” (Luke 24:25) Then Luke adds this flourish: “And beginning with Moses and all the Prophets, he explained to them what was said in all the Scriptures concerning himself.” (Luke 24:27) A short time later, the lights at last go on that he really is alive.

Life is hard, and there are a lot of times when we’re tempted to let loose our inner Eeyore. What do you do in those moments when God doesn’t feel close, or you’re not even sure if he’s there? Maybe you’ve made this whole thing up. It’s in times like that that when you need to call to mind the undeniable, unexplainable wonders that are found in our faith.

Things like the empty tomb – how’d that happen? – and things like the fact that all the disciples were willing to die rather than take back their confession that he was alive. (If it was a hoax, and they knew it, they wouldn’t have all kept up the charade. Someone would have buckled.) And things like the Bible’s hefty record of fulfilled prophecy.

This Easter season, our church is studying the great prophecy of Isaiah 53 verse by verse. Isaiah describes Jesus’ arrest, execution and resurrection with such precision, you’d swear he were an eyewitness. Just one problem with that thought: Isaiah wrote those words 700 years before Jesus was born.

Put that in your Easter egg and scramble it.