I was cynically hopeful the other day when I went to see the film Risen – having been burned by Hollywood so many times when it comes to how the Bible is depicted. (Rock giants in ‘Noah’?) Well fear not, friends. Make Risen part of your Lent-Easter schedule. It’s the best Bible movie since The Passion of the Christ. In fact, where Passion leaves off is essentially where Risen begins.

Risen focuses on a fictional Roman tribune named Clavius (played masterfully by Joseph Fiennes) who is on the scene at Golgotha to supervise the removal of the Jesus’ body from the cross, then a few days later is ordered by Pontius Pilate to investigate why his tomb was found empty. Rumors of resurrection are in the wind, and the Roman and Jewish leaders are quick to scotch them before…say, a new religion that will change the world is born. (Rock giants!?)

The first part of the story feels like CSI-Jerusalem as Clavius and his men poke around the tomb, search burial pits for Jesus’ body, and question anyone connected with the incident. (The film is not gratuitously violent, but some scenes may be disturbing to some.) Clavius, assuming at first it’s a straight-up case of grave robbery, shifts from annoyed to perplexed to disquieted as each of Jesus’ followers he hauls in for questioning exhibits perfect calmness and joy in the face of his threats.

When Clavius confronts one of the soldiers guarding the tomb – who had been paid off and pardoned to say that the disciples attacked them and stole the body – the soldier breaks down and confesses what he actually witnessed. It’s one of the most powerful scenes of the movie (and reminds you of a still detectable difference between high production films and some Christian lookalikes – real acting.)

As Clavius begins to put the pieces together, his search becomes less about a crime scene, and more about his own soul. The second half of the film follows him as he goes from being the hunter to the hunted – hunted both by his own soldiers, and – spoiler alert! – by the risen Messiah. The movie takes a few liberties with the Bible timeline, but there are no rock giants, and nothing that should have you writing your congressman.

As someone who has created his own work of biblical historical fiction with my sequel to Ben-Hur, I appreciate a story like this that’s willing to explore the Bible creatively and artistically, while taking it at face value at the same time (that which films like Noah and Gods and Kings failed to do.) 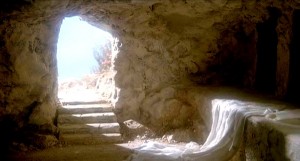 ics that is not for the spiritually faint of heart. To any skeptic reading this, be very, very careful when you poke your head inside that empty tomb. I dare you to explain with reason and logic what happened in there.

But be forewarned. Over the years as many skeptics have taken that challenge – like General Lew Wallace who wrote the original Ben-Hur in the late 1880s, to a skeptic named Frank Morison who wrote the classic Who Moved The Stone? in 1930, to Lee Strobel a contemporary journalist who wrote The Case For Easter – they, like Clavius, ended up somewhere they never expected.