Two days ago we unpacked the final box. Yesterday, I assembled my power tower and did chin-ups in the garage. (There’s a story there – that power tower almost didn’t get packed. Janis said, “No.” I said, “Yes.” While we dithered back and forth, valiant brothers from Grace disassembled the power tower and secretly handed me its pieces which I hid in the truck.)

Today we hang the final picture. At last, a calming voice arises within me saying…Good Lord in heaven, what have you done?!

Here’s what I’m looking out on as I write. We live in a two-story townhouse and outside the master bedroom is a lovely walk-out deck. The townhouse itself is two years old. Everything is new. And beautiful. Sure it’s smaller, but it’s growing on me fast. The master is bright and spacious with a bathroom pulled straight out of a 5-star Marriott. And to have it open on this nook of a deck from which I’m writing overlooking these rugged foothills and to know that right behind them are hiding the vast San Gabriel Mountains; and then to have two dozen mature, manicured palm trees (palm trees!) lining the street below me – my little boy’s heart just can’t take it in.

And there is nothing to maintain here. I went around with the drill yesterday and tightened up the toilet seats. Jan washed some marks on the wall that we made moving in. That’s it. Punchlist completed!

We’re part of an expansive complex called Rosedale – I still don’t fully know what Rosedale is. When I asked for a copy of the home association rules, I was sent a 200-page PDF. (Why does the word Stepford come to mind here? “We all bundle.”) The largest headache of this entire saga came the day the moving truck was delivered. U-Pack was going to have to leave the truck overnight and was going to take up two parking spots. At least 23 rules were in risk of violation. I expected torches to be lit that night by irate neighbors. What a first night it would have been! In the end, we were granted permission by the Association powers-that-be. All hail, Rosedale!

It’s not all bad. There seems to be multiple property managers running the place, and multiple neighborhoods here, but also multiple pools, gorgeously landscaped with lots of palm trees! And a decent fitness center. Here’s a picture of the central pool area. Somehow I’m going to actu 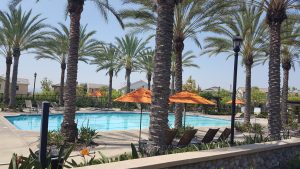 ally have to sit here and find the inspiration with which to write. Pray for me please.

The development itself – though we hear there’s a bit of crime – seems peaceful, spread out in a very pleasing fashion. Jan and I went for a walk last night up toward the central pool, said hi to a dozen neighbors out walking their dogs. (Yes, unfortunately, dogs outnumber cats here 10 to 1, but you can’t have everything.) There are measured hiking trails nestled into the green space here, and as you climb, the soothing dark of the mountain is in one direction and the twinkling lights of the cities in the valley spread out in the other direction.

Truly, the Lord had brought us to a spacious place. As Pastor Michael said a couple of weekends ago referring to the Apostle Paul: Unless you leave Antioch you can’t experience Macedonia.

And now at long last, we get to breathe, rest, and resume normal life. Frontier comes on Friday and hooks up our TV and Internet. (How did Paul spread the reaches of Christianity across the Roman empire without internet?)

What will normal life look like for us? Well, for Janis it will mean starting to connect to the horse community that’s roundabout us. And looking around at job possibilities. For me, it will mean writing. Lots of it. Ben-Hur is released on Augus 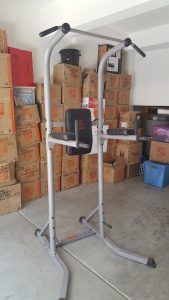 t 19. By the weekend, Lord willing, I’ll be getting Ben-Hur: The Odyssey on to the Amazon publishing platform, giving it some spit and polish – and a new name…The Legend Of Ben-Hur (with thanks to Rich, an old agent friend of mine.)

But that’s just the start. I have my script Deep Freeze to market, which means finding a way to approach producers which are as abundant as palm trees out here. I’ll be writing a script version of A Sparrow Could Fall which will serve as a pilot for a mini-series/TV series, with a half-dozen episodes to map out and write. Also on the docket is finishing my 40 Day devotional on sexual purity. More than enough work to tie me over for the next few months. I’ll also be looking for pulpits to preach from and Bible studies to form – maybe even in Rosedale (though I think Rule #2,842 on Page 173 forbids religious proselytism.)

But the payoff for us has begun. Last Sunday after church, we met Hannah in Burbank to see the new Star Trek movie, had coffee, then each went back home. Couldn’t have done that before.

Off to Starbucks now so I can get this posted. Such hardship. How did the Apostle Paul do it?