Got Anger? Chill…Be Still…It’s God’s Will.

Peace seems in short supply today in the dawning of the New Age of Trump. Anger is in. If you don’t like something or someone, go have a tweet-storm.

“If it is possible, as far as it depends on you, live at peace with everyone.” Paul in Romans 12:18

Life also has a way of battering down our defenses, driving out peace, and stirring up anger. Jan and I spent three hours at the California DMV the other day registering our cars (and we had an appointment!) Fill out these 16 forms. Go wait in this line. Which lets you talk to the guy who sends you to the next line. Smog fee. License fee. Value fee. Late fee. That’ll be $6,000 please.

“In your anger, do not sin. Do not let the sun go down while you are still angry, and do not give the devil a foothold.” ~ Ephesians 4:26-27

Scripture makes two critical points about anger here that we must not miss. First, anger by itself is not sin. It’s possible to feel anger, and for it to be the right response. Psalm 7:11 says that God feels indignation every day. Those things you see in the news that unsettle you unsettle him as well.

Jesus felt anger. When he saw the way the religious leaders were ripping off God’s people in the temple, it stoked his zeal. Overturning tables and driving out the profiteers was not gentle Jesus meek and mild. 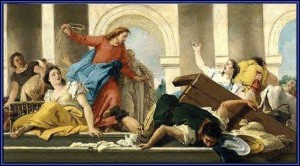 ond point though that Paul makes is equally important. Though anger is not necessarily sin, it can so easily take you there. There is often a whisker’s breadth between the two. I think for many of us, we lose our cookies way too easily. It seems that sin is always ready at a moment’s notice, knocking on the door of our hearts with a sharp “Anger here, sir, at your service. Just give me the word, and I shall rage!”

Not only is there a lot of personal anger that so many followers of Christ have not brought to heel, but there’s a lot of corporate anger these days that vents from the Church. The so-called “angry Christian” has almost become a cliché in the world today. Christians seem to be angry at everything. We’re angry at Target, angry at the Supreme Court, angry at politicians who don’t vote the way we want, angry at Hollywood, angry every Christmas at Starbucks over the color of their cups!?!

It’s not the job of Starbucks to preac 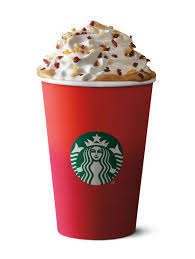 h the gospel. That’s my job. It’s Starbucks job to make good coffee. And I don’t care if they put it in a red cup or a black cup. (If they ever put it in a cup shaped like the devil’s head, then we’ll talk.)

Christians need to stop being so offendible, and take some of that passion and vitriol and direct it at something that really deserves our anger – like maybe Isis wiping out Christianity in the Middle East, or the sex trafficking that is going on right under our noses.

For twenty years now at least, as the so-called Culture War has raged on in America, Christians have relied on anger, protests and boycotts, thinking that this would keep our country from sliding into the abyss of secularism. But anger is a double-edged sword. Used too routinely, it can harden the heart of the one we’re trying to change and bring to Christ. It can drive them further away, and make them twice as opposed to the thought of becoming like you.

Worse yet, if used too routinely, anger can make our own hearts bitter and spiteful. Until we reach a point where we forget in our crusading that we’re supposed to be representing the one called the Prince of Peace.

Paul gave his young protégé Timothy instructions about how to promote Christ in a pagan, unbelieving culture. In 2 Timothy 2:24 he wrote, “And the Lord’s servant must not quarrel; instead, he must be kind to everyone, able to teach, not resentful. Those who oppose him he must gently instruct, in the hope that God might grant them repentance.”

“Everyone should be slow to speak and slow to become angry, for man’s anger does not bring about the righteous life that God desires.” – James 1:20.

So if anger is usually there, like a first-responder in your heart, then you and Jesus need to start working on this. If every time something happens or something is said that you don’t like, and you get all green-skinned and Hulklike, then a little Holy Spirit anger-management class might be good for you.