God Would Vote For Whom…?

If Charles Colson were not dancing in the meadows of heaven, he’d be rolling in his grave.

The late, great Christian writer and thinker (and founder of the renowned Prison Fellowship) wrote often about the engagement of Christianity and politics. As Richard Nixon’s ‘hatchet man’ prior to his conversion, he knew the backrooms of Washington D.C. like no one else. Drawing from his experience, he could speak candidly – and prophetically – about the lure and dangers of political power. His classic manifesto “Kingdoms In Conflict” written in the late ‘80s encouraged Christians to engage culture politically but to do so with discernment.

“Christians need to enter the public and political square with eyes open, aware of the snares,” he writes. “The church, whose principal function is to proclaim the Good News and witness to the values of the Kingdom of God, must resist the tempting illusion that it can usher in that Kingdom through political means.”

Colson’s not advocating here that Christians abandon politics. Not at all.

“The separation of church and state does not mean religion and politics should be separated or religious values removed from the public arena. For one’s political life is an expression of values. And religion, by definition, most profoundly influences values.”

In this, he channels the Founding Fathers who recognized that in order to survive, a society of free citizens also needed to be a society of virtuous citizens. And religion was the safest method of producing such people. John Adams said, “We have no government armed with power capable of contending with human passions unbridled by morality and religion.” The French historian Tocqueville observing the vibrant role of Christianity in the early years of our country wrote, “Liberty cannot be established without morality, nor morality without faith.”

Why then did Colson repeatedly issue warnings to Christians to tiptoe cautiously into the public square?

He writes, “Consider the dangerous pitfalls awaiting the unwary. The first is that the church will become just another special-interest group.” Colson reminds us here that no political party can represent all the issues that Christians should be concerned about. Evangelicals have issues that are front and center in their minds, but God is concerned for it all.  He is concerned for issues of both righteousness and justice (Ps.97:2). But if you make your bed in one party, you’ll start to see the world through that Party’s eyes, and less God’s.

“A second danger is that Christian leaders who are corrupted by political forces may soon begin to overestimate their own importance…A side effect of this delusion is that rather than lose their access to political influence, some church leaders have surrendered their independence.” Here Colson reminds us that the Church is meant to have a prophetic voice from outside the political world.  There are weaknesses and blindspots in every political party. There are forces of compromise and corruption that infect the whole political beast (and politics has ‘beastly’ qualities if you recall your Daniel and Revelation.) Once the Church aligns itself one side or the other, it loses that prophetic perspective it so desperately needs.

“In this way the gospel becomes hostage to the political fortunes of a particular movement. This is the third and perhaps most dangerous snare. Both liberals and conservatives have made this mistake of aligning their spiritual goals with a particular political agenda.” The third warning Colson issues is that a Church too immersed in politics may forget that God’s kingdom will come not because of a political movement but because of a spiritual one.  And so in the end, prayer and evangelism and servanthood are our primary weapons.  Winning votes is great, but if we do not win hearts and minds and souls, then ultimately those votes will be lost as society drifts further and further away from God. (Gay marriage, anyone?)

So at the end of January, even before the Iowa caucuses launched this year’s election cycle, Jerry Falwell, Jr., the president of Liberty University publicly endorsed Donald Trump for president, and Rev. Robert Jeffress, influential pastor of First Baptist Dallas fell over himself to introduce Trump at several massive rallies (though not ‘officially endorsing’ him, he said.)

The point here is not to discuss the merits of Donald Trump, or to say that ‘Christians shouldn’t talk politics.’ As private citizens by all means talk, share, speak, post, think! Politics is fun, politics is blood-sport, politics is essential (who replaces Anthony Scalia in not inconsequential, I assure you. Oh, and BTW: I’m quite confident that Scalia and Colson have enjoyed some banter in the past week.)

Tocqueville wrote of the clergy in America in the 1840s: “…the American clergy in general…are all in favor of civil freedom, but they do not support any particular political syste 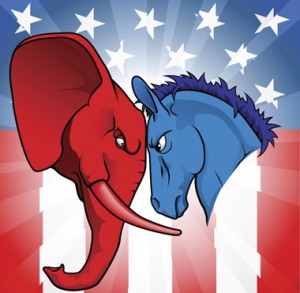 m. They keep aloof from parties and from public affairs. In the United States religion exercises but little influence upon the laws and upon the details of public opinion; but it directs the customs of the community, and, by regulating domestic life, it regulates the state.”

In the spirit of Charles Colson and Alexis Tocqueville I ask: What business do Falwell and Jeffress or any Christian leader have in parleying their influence to tell their respective flocks how they should vote? By what right do they short-circuit the spirited conversations that need to be held about the merits of this person over another, or this party over another? By what prophetic wisdom do they see the country served better by this one over that one, especially before a single vote of a single primary has been tallied?

Mr. Colson would remind us what Two (T-W-O) Corinthians 10:4 says: “The weapons we fight with are not the weapons of the world.”

Kingdoms are tussling as we speak. Let’s keep them in the right order, shall we?