How To Grow At Bible Literacy

Home/Bible, Culture, Spiritual Disciplines/How To Grow At Bible Literacy
Previous Next
How To Grow At Bible Literacy
Biblical literacy is essential to our health and well-being – personally, culturally, nationally, you name it. Jesus directly linked the knowledge and practice of his teaching to experiencing true stability and security in life (Matthew 7:24-27). Our Founding Fathers believed it. They were insistent that the Bible be taught not only in churches, but in schools as well. Not to make people into Congregationalists, Presbyterians or Baptists. But to make them virtuous – their logic being that freedom without virtue would lead to corruption, chaos and eventually loss of freedom. To their thinking, knowledge of the Bible’s moral teaching was one of the best ways to cultivate virtue in a person’s life.

Yet today, the average citizen can’t name even four of the Ten Commandments, doesn’t know that Abraham Lincoln was quoting Jesus when he said, “A house divided against itself cannot stand,” doesn’t realize that Martin Luther King, Jr.’s “I Have A Dream” speech resonated with Scripture, and is taught at tours of the Supreme Court building that the tablets Moses holds in his hands depicted at least a half-dozen times in artwork around the building are not the Ten Commandments, but the first ten amendments!

Biblical illiteracy however is not just a problem in our wider culture. It shames me as a pastor to admit that the same thing is generally true within the Church itself.

For those who claim to be lovers and followers of Christ, it is worth reminding ourselves that Jesus himself told us that his words were to “abide in us” (John 15:7). The very way that Jesus says it is telling. He doesn’t say that you are to abide in his words (which would suggest the physical act of reading the book or listening to a sermon – something you could check off a list when finished.) His words are to abide in you. They are to become a dynamic, living part of you, till you breathe them in and out like the very air in your lungs. (It goes without saying that until you learn to abide in his words through the reading and listening, that his words won’t abide in you, but sadly too many Christians stop with the first task and consider their job done.)

Jesus himself models for us what this looks like in the story of his being tempted by Satan in the wilderness in the early days of his ministry (for the biblically illiterate, you can look it up in Matthew 4:1-11.) In his combat with Satan, Jesus shows three deepening layers of scriptural knowledge. 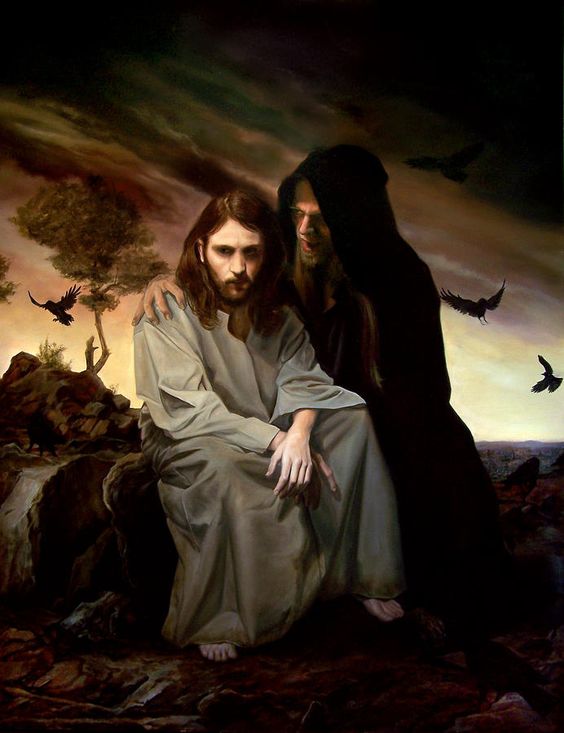 First, he has a knowledge of the words. He can think biblically.

He has read and studied enough so that he knows his way around the Book and can reel off verses that he remembers, which he uses to knock down Satan’s first volley of temptations. Sadly, way too many Christians can’t even demonstrate basic Bible literacy. So when someone comes along and says, “But Jesus never said a word about homosexuality or transgenderism,” they start picking lint out of their navels, when that argument is as simple to knock down as a snowman’s head.

So if you’re one of those believers who is struggling with biblical illiteracy, your first order of business is to just start gobbling up the book. Don’t be shy. Put on a bib and stuff your face full of it. Let it drip and drool off of you. Don’t feel like you have to start with Genesis, because you’ll get a flat tire by Leviticus. Better to start with a gospel and read directly of Jesus first. Read a proverb in the morning and a psalm at night. Make sure you go to Bible studies. (Get in food fights with other believers.) Devour sermons. If reading is a challenge for you, put the Bible on your playlist plate. You have to get the words and stories into your short-term memory first so that they can then march their way into your working-memory, which is when most of the magic starts to happen.

Second, Jesus had a knowledge of the doctrine of the words. He could think theologically.

If someone asks you why you believe something, and you reply, “The Bible tells me so,” you’re only thinking biblically. Now it’s time to step up your game.

When Satan pulled his own Bible verse out of the hat (and out of context), he hoped to trip Jesus up. But Jesus had none of it. The word of God so abided in him that he knew how its teachings were all intertwined together in a beautiful tapestry of truth. This may surprise you, but the 66 books of the Bible actually tell one beautiful epic story (spoiler alert: it’s all about Jesus.)

How do you begin to flex your theological muscles? Don’t just read, but also reflect. God invites you to worship him with your mind, as well as with your heart, soul and strength. “Come, let us reason together,” he says (Isaiah 1:18). He invites scrutiny and questions. He’s a big boy; he can handle it.

Case in point: If you really start to think deeply about what the Bible teaches about sexuality, in time you will stand back and marvel at the creativity, genius and love of God. But if you just drift thoughtlessly along with the current of culture, accepting its logic, you’ll become a danger to yourself and little use to God.

Learning to think theologically will deepen your faith as few things can. As you begin to put the puzzle of Old and New Testaments together it will leave you breathless. As you begin to understand the grand themes of creation, fall and redemption, your love for God will grow. You’ll find yourself better equipped to face trials when they come. You’ll be more eager to share your faith with others. You’ll have the courage to hold the line when the media, and Hollywood and Washington D.C. tell you to give it up.

When someone comes along like the devil did, spouting gibberish with a Bible verse attached to it, you’ll spot it at once. If someone asks you why you believe this is the Word of God and how it’s different from any other so-called “sacred” books, you’ll be able to explain why. But only repeated readings and deeper thinking over time will bring you to this place.

One way to learn to think theologically is to begin to read books of what Christians call “systematic theology”, alongside of your Bible reading. One of the best I’ve come across which I have used extensively in my teaching is “Systematic Theology: An Introduction To Biblical Doctrine” by Wayne Grudem. Get in the habit of supplementing your Bible reading with a page or two a day of this thorough and readable book and you will discover immediate rewards.

Thirdly, Jesus had a knowledge of the spirit of the words. He could think transformationally.

The Bible was not given to fill your head full of data but to fill your heart full of the love of God. And it was the love Jesus had for God his Father that kept Jesus resolute and pure when Satan came calling.

If I can sniff out an Arminian or Calvinist from a hundred paces, or give you 17 reasons why complementarianism is preferable to egalitarianism, or blog extensively about eschatology theories, but still am an ornery cuss that fights with my co-workers and mistreats my wife and kids, then I still don’t know God or his Word.  “Knowledge puffs up, but love builds up,” (1 Corinthians 8:1). Without being transformed in Christlike love, I’m just full of hot air.

How to I reach this point of growth? I have to read, reflect, then respond. Jesus said, it’s the one who hears his words and puts them into practice that will become like a house built on rock. If I come to the Bible with my own agenda, ‘looking for loopholes’ like W.C. Fields, prepared to spin it in a way that suits me, I will never experience the transforming power of God’s Word.