I can’t keep this a secret any longer. I’ve been holding it in for four years. My heart is thumping about something about to happen this weekend, and no, it doesn’t have anything to do with the Cardinals beginning another playoff run. Sunday night…wait for it…I’ll be one of 18 million Americans watching the season 6 premiere of “The Walking Dead”.

Boy that feels good to get that off my chest.

Obviously, I recognize that this confession may disturb a few. I’m a Christian and a pastor. Doesn’t the Bible tells us to have ‘nothing to do with the appearance of evil’? And isn’t TWD a show that traffics in evil (not to mention gore?) Well, yes and no. Let’s be honest – if the Bible were filmed straight from the script it too would have considerable evil and gore in it.

Before I offer my defense, let me say up front that this is as Romans 14 an area as ever there was one. (Romans 14 has to do with gray areas of how we practice our faith. Not everything is black and white. Christians will have differences of opinions about countless things – the foods we eat, the holidays we celebrate, worship music, Bible translations, alcohol consumption, end-times theories, and yes – your occasional zombie apocalypse.)

I am not encouraging you to watch TWD. I would never generically say to anyone, “You need to see this.” In fact, most people probably shouldn’t watch it. The gore is considerable and disturbing. The hopelessness of this imagined universe is palpable. (And should the writers decide to eventually extinguish what tiny embers of hope do float about the story, I will be done with it. A world without hope is not a world a Christian can inhabit.)

But I feel a need to explain why I watch it, because I don’t want anyone to stumble on account of my choice (another burden in Romans 14.)

First, the artistry of the show. There are a number of little things that for me as a writer are compelling. The show is beautifully written. And beautifully filmed as well. You would think that a world overrun with the undead couldn’t get any uglier, but the creative cinematography of the show has indelibly imprinted countless images on my mind of a stark, lonely beauty.

It might surprise many, but there is virtually no profanity or nudity in the show. And I appreciate that. I weary of our culture’s debasing of language in popular art. And the lazy and tasteless way in which nudity is used in the absence of romantic and modest sensuality.

Most importantly, the writer in me appreciates how masterfully the characters are drawn out. It doesn’t take long to begin to care for them and root for them. In fact, as season 6 dawns, the core cast has achieved rock star status. (David French in a recent National Review article about the cultural significance of TWD observed that if the show ever kills off the beloved Daryl ‘cities might burn’. That’s only a slight exaggeration.)

Which brings me to the second area of attraction for me about the show – the cultural commentary it offers. Stand back from the show itself and ponder the popularity of a show about the end of civilization. Why are zombies more popular than Sunday Night Football right now?

Popular entertainment choices reflect in some fashion what’s heaviest on the hearts of people. Sure, many mindlessly watch to enjoy zombies making a happy meal of someone. (Zombies tend to dine in community, incidentally. Not sure what that means, but…just saying.)

But a case can be made that TWD says a great deal about the latent insecurity that seems to underlie so much of American life today. In so many areas we seem to be hanging on by a thread. Our leaders keep telling us everything is fine, but most of us know better. 19 trillion in debt, a coming-to-a-world-near-you nuclear Iran, a Russian bear coming out of hibernation, affordable health care (at the count of three, everyone laugh). It wouldn’t take much for things to fall apart.

People feel that in their bones, so they feel drawn to watch a show where the center does not hold and the tipping point has been crested. There’s no room for political correctness in this world. Obsessing about micro-aggressions, college-safe spaces and gun-free-zones in this world will only get you killed. French explores how TWD demonstrates the unraveling of numerous liberal tropes – that government is the answer, that utopia can be engineered, that human nature is perfectible. Which brings me to a final reason why this show is at the top of my DVR list.

TWD is at its heart a morality play about the human heart. And what it concludes about us is something the prophet Jeremiah told us 2,600 years ago – “The heart is deceitful above all things, and desperately sick” (Jer.17:9). Life is metaphor, and in the show the true ‘walking dead’ are not the zombies, but the human survivors. 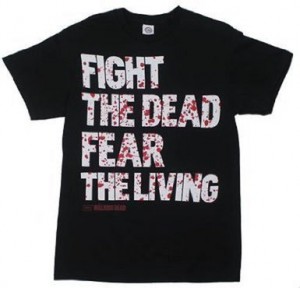 We think we are good, but we are only untested. Remove the props of comfort and civilization from beneath us and what would flow out of us is the true horror show. The agony of this show is to watch Rick, Daryl, Michonne, et al, drag their heels to resist this gravity of evil, all the while coming into contact with other communities made up of those who long since gave up that fight.

It’s not a hypothetical world. It’s what the book of Judges depicts – a world where there was no king and everyone did what was right in their own eyes. It’s a world much of Germany succumbed to as the Nazis overran the land. It’s a world where professionals in lab coats occupy back rooms, ripping apart lifeless fetuses for body parts, and Christians are shot dead by a madman simply for saying they are Christians.

Like all good morality plays, what continues to appear is a scarlet thread of grace that runs through the show. Those with the clearest moral voice – like many an Old Testament prophet – usually don’t last long in the TWD universe (Dale, Herschel, Beth; now Morgan maybe?) But their presence inspires the others to do their best to hold the line. And leads to stunning moments in the show when hope bursts through like a shaft of sun through a thunderhead.

If the writers stay on course, I will stay tuned in. I’m not saying you should do the same. What God grants me the freedom to enjoy may not be right for you. Don’t judge me for my freedom; I won’t judge you for your boundaries (Romans 14 again.)

But goodness, I’m glad I got that off my chest.