It’s Not Easy Being Gray

How do we Christians live at peace with one another when we have differences of opinion about things? I’m not talking about fighting, or having a brouhaha (I love that word! If I led a rock band, that’d be our name.) I’m talking about gray areas, when we don’t see eye-to-eye.

My wife and I see the world differently. I love to cook but hate cleaning. Janis is not into cooking so much but keeps a great house. So here’s a picture of our kitchen the day before Thanksgiving, and I’ve just cooked two pies. Janis walked into the room and screamed audibly, as though she’d seen a hairy spider. She said, to my bewilderment, that the kitchen was a disaster. ‘A disaster?’ I said. “This is art! This is a craftsman at work! This is the canvas when Rembrandt puts down his brush. This is Michaelango stepping back from David.” She wouldn’t have it.

But this is a part of life that we Christians need to work on with each other if we’re going to have peace. Especially in church life. There are so many areas of our faith where we’re going to have different viewpoints. Things like Bible translations, worship styles, end-times theories, what movies should we see, what music should we listen to, Harry Potter, should a Christian drink alcohol, roles of men and women, should we observe Halloween and Christmas, gifts of the Spirit, young earth/old earth, Calvinism vs. Arminianism – so many battles, so little time!

Part of the problem with us is that because there are very real black and white areas in our faith – there are lines to be drawn doctrinally and ethically, there are hills that we need to be willing to die on – we have this reflex to bring this same spirit into every discussion we have. We bring a blow torch when a flashlight is called for.

Another thing we do is because we claim that God communicates with us through his Spirit, we oftentimes have these very strong feelings and thoughts inside of us, and we make the assump 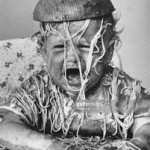 tion that what we’re feeling must be from God. We ‘canonize our thoughts’. We throw around phrases like, “Well God told me this,” and the “Spirit told me that,” and we assume we’re on the inside track with God, rather than what we should say: “Well, here’s what I think God is saying to me. I could be wrong on this, but here’s my take…”

This was Paul’s burden in an essential chapter of Scripture, Romans 14. This is must-reading if you say you follow the Prince of Peace. The early church found itself in a transitional period. It was ‘out with the old… in with the new…’  testaments that is. And a lot of things that believers practiced before Jesus’ death and resurrection now were fulfilled in Christ, and no longer were binding on believers. All the Old Testament food laws, all those ceremonial laws about sacrifices and worship feasts, the need for priests, the need for a temple – all these things were on their way out now.

So Paul says some critical things in Romans 14. First in verse 1 he says, “Accept him whose faith is weak, without passing judgment on disputable matters.” So the first thing we need to get into our thick craws is that there are such things as ‘disputable matters’. There are gray areas. Not everything is black and white. You know what’s going to be served at dinner on the first day in heaven? Crow. Lots of it.

Then Paul says in verse 3, “The man who eats everything must not look down on him who does not, and the man who does not eat everything must not condemn the man who does, for God has accepted him.” Here Paul is saying: You need to respect the relationship that the other person has with his or her God. And honor the fact that the position they have arrived at was made in deep reverence for their Lord, and how dare you assume otherwise.

nsiders one day more sacred than another; another man considers every day alike. Each one should be fully convinced in his own mind.” Here, Paul is telling us: You need to respect the thought that the other person has given to this matter. Take each of those areas of debate we mentioned earlier. Once we’re in heaven, we’ll find out who was right and wrong. The earth will either be very old or very young. Jesus wanted women to be pastors or he didn’t. Someone’s going to get it right, and someone’s going to get it wrong. But the fact is, we’ll all be there in heaven to learn the truth. No one will be left out because they picked the wrong side. As long as we pick Jesus, we’re good to go. There are many Bible-loving, Jesus-worshipping people on all sides of each debate, and we need to learn to respect that fact.

Charles Spurgeon is quoted as saying. “Christians need to be narrow in doctrine, but broad in fellowship.” Be narrow in doctrine – know what you believe and be able to Scripturally demonstrate why you believe it. But be broad in fellowship. Know how and where to draw lines. Be a good surveyor of the hills around you, and know which are the ones for playing on, and which are the ones for dying on.

Let’s focus on building up that kingdom, God’s kingdom, rather than building up the kingdom of yourself, where you are seen and praised as the All-Wise, All-Knowing, and Never-Wrong. Let’s save that title for someone who deserves it.

A podcast of this essay is also available. Just click here. Or visit the ‘Sermons and Podcasts’ tab.