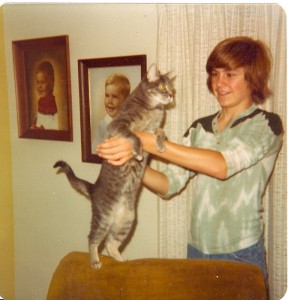 In the summer of ’79 my father was transferred from Chicago to Omaha. As I began my senior year in high school, I found myself 450 miles away from my girlfriend, and friends, still drifting from God and very down about life.

October 8, 1979. My second V.W. Beetle bit the dust last weekend. I was returning home after spending a couple days in Marshalltown. Just my luck when an Iowa driver from Omaha kissed my fanny. And when you kiss the fanny of a Beetle it’s time to break out the spade, dig a nice big hole in some lonely field and lay the memory to rest. So anyway, what I’m driving at is that I’m not driving. The VW really didn’t have a chance to begin with. My theory is that God didn’t like the car too well so he tried to dispose of it without anyone getting hurt. And when God is against you, you might as well pack it up then and there. Anyway, a couple weeks before the accident, dad, my own father and the owner of the damn car, plowed right into the thing while it was parked in the driveway. And if you aren’t safe in your own driveway, then where are you safe? Back to the horse and buggy.

Where will I be a year from now? Anxiety, nervous tension, strange beings from outer space, the works. So tell me God, does it snow in heaven?

Why does Mother Dear find it hard to pick me up at school? Here I am, a Senior in High, High, High in the Midday Sun School, walking five miles home from school. No one sponsors me. It’s not for any worthy cause except for the local funeral home – I almost got hit by numerous cars, one train, and a flock of geese tried to crap me to death.

Man, I wish I had a car. I want to drive out to Chicago so bad to see J. Where are you?

Got an A on a science test, true to my word. See, I flunked the last test out of sheer laziness so I had to find some way to convince teacher that I am an A student. So to prove it to her, and to reassure myself, I studied and BINGO…A.

October 15, 1979 – Monday.  Our A.P. Biology class paid a visit to the zoo today. The field trip went fine till two or three chumps decided to go fishing in the wishing well. BUSTED! Zoo officials nailed ‘em and now the prince will hear and the Board of Education will also get into the act. Looks like notes and tests are in order for the rest of the year.

I hated being in this school, this town, this life. Living in a rural town in western Iowa, going to school with these yahoos, was teen-age purgatory. My life was back in Chicago. I needed to go back. And thoughts were percolating in my heart about going back.

The big event of the day was Dad and I going to Omaha to hunt for a car. We might just have possibly struck gold. There is a little Hornet, yellow, in seemingly good condition, that I can see myself getting into. And gosh golly, does that babe haul A! If the mileage is halfway decent, I’m in love. I’m so used to that VW though that a horse and buggy would seem like a Corvette. Anyway, Wednesday might be the day we bring it home for a trial period.

Other than that, the Vikings loss to the Jets 14-7 on Monday Night Football. It’s hard to win though when you have seven turnovers. Night.

Wish I could have gone back in time and picked another team to follow.

October 18, 1979 – Thursday. I didn’t see it at the time, but I had a storm of anger brewing in my heart against my father that fall of ’79 as reflected in this entry. After all, he was the one who had ruined my life by yanking us out of Chicago. “If it wasn’t for Dad…” A teen’s heart can be so selfishly myopic. I couldn’t see all the pressure my Dad was under to keep a family of four kids afloat.

Well, tomorrow my senior pictures will be taken. The moment of truth. I’ve got 12 chances to make it count but knowing me…HELP! Just wish me luck.

Forget about that great old car I was talking about the other day. Dad never called that guy Tuesday to tell him to hang on to the car and naturally they sold it. Man, that was a nice car. Dad always has a way of messing things up. The other day the insurance company of the guy who hit me offered pop $800 in settlement. Well he twiddled his thumbs and got a letter in the mail saying as of the ninth you would pay all storage fees for where the car was. Just another plaque for Dad to hang on the wall.

Pittsburgh won the World Series, coming back from a 3-1 deficit. Stargell went 4 for 5, was MVP and I better start praying for Hernandez.

October 22, 1979. My girlfriend and I had dated for over a year and were very close. Time and distance was beginning to do what time and distance does. Two months from this entry I would leave home for good (at 17) and return to Chicago. The idea of taking this step didn’t occur to me just yet, but the churning wheels of thought were set in motion on this day – October 22.

A lot of developments have popped up in our last few days and all but a couple have pushed me into the dumps. The major one is that Janet and I are on the rocks, not because of friction between us but because of an inevitable situation – time. I asked if I should drive out next month but she said no because “it wouldn’t be the same.” I don’t know. I’m hanging on okay now but if we ever just drop it in call it quits that I don’t know what. My emotions right now are just oh so tight and a little more either way and –.

We started the second quarter at school today so what used to be 16 is now down to three. Man, time has flown. But God, 206 days till May. I’m just worried about me and Jana. That’s TOO long. Come on somebody! Help me! God? Are you there?

Oh, he was there alright. And all this agitation he would use to bring me back to himself.

October 23, 1979.  I got a car today! Yesiree! This time, barring a flood, fire or Communist invasion, it’s for real. It’s a Buick Opel. Get this – a 1979, 4-speed, 4-cylinder. We went over our predetermined price ceiling. This one’s going to cost me $3600 but for that price, I got a gem. Except for wear on the tires, everything is choice. It’s got 6000 miles on it, and it has heat and the defroster and the clock and it accelerates like a champ. It’s BEAUTIFUL!

Other than that, I wrote Janet a three-page letter in an effort to iron things out. P.S. I finished the lyrics to two songs: World Lost II – Epilogue, and “To Have And To Hold”.