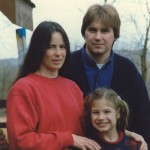 July 6, 1992. A week ago Monday I put my two girls on an airplane bound for Washington and I will not see them again until August 4. If I do not avail myself of this miserable opportunity to put my life in order, that I will forever be a self-centered, lazy wreck. I wouldn’t have chosen this for myself, but thanks to this summer’s ‘fare wars’ between the major airlines, the tickets were snatched up so quickly, that my girls could not book a return flight till five weeks after their departure. So here I have five weeks of undisturbed solitude. Can I get my heart out of the Valley of self-pity and motivate myself to new heights of achievement and order? This is my test. Last week was sort of a false start because Thursday morning I went home to celebrate (rather mourn) my 30th birthday with Mom, Dad, Jaybird, Eric, Kelly, and my new nephew Joshua Christopher. Racquetball, Mom’s garden, Dad’s lawn, chocolate angel food, Wimbledon are the snapshots of this quick trip.

February 1, 1993.  Having graduated from seminary in 1992, I was halfway through a 5 year ministry in Dalbo, MN. This was my first entry after a 6 month gap in journaling, my longest gap ever. Guess time stands still in Minnesota.

Why February 1? Who knows? It’s the first of the month. It’s unseasonably mild. The NFL season officially ended Sunday (52 to 17 Dallas). Who can comprehend the influence upon my heart and mind that strike up the band of motivation within me. I give up trying to guess. I’d like to think that prayer sets the wheels in motion. But two weeks ago I fasted and prayed for the first time in perhaps a year and proceeded to have one of the ugliest, most miserable stretch of days since I was potty-training. So I give up trying to guess what it is the suddenly causes me to explode into creative energy – and likewise what it is the causes me to descend into a cesspool of lethargy and inactivity. Why did my journal-writing stop when it did and why resume at this particular point? Why has it taken me months to read my first post-seminary book? Why will I plunge into a workout routine that gives me Olympic size ambitions, and then go weeks where I couldn’t define ‘sit up’ let alone do one. The struggle for consistency and personal discipline is the perennial struggle of my life. Seminary was like the moon, giving an ebb and flow of regularity to the tides of my life, but once that was removed from my orbit, I have floundered in erratic and unpredictable surf. When I get to heaven, the first question I ask the Lord will not be – why is there evil? – Or was Calvin or Arminius right? But simply – who am I? I wish I knew.

February 2, 1993.  This past Saturday, a small contingent from Dalbo went down to Bethel for a conference on families posted by David and Karen Mains. It was an exceptional affair, but despite the notoriety of the main speakers, the day was stolen by the performance of Richard Allison, a local actor turned Christian celeb who is worthy of far more accolades that I could shower upon him. I had heard of him through the production of “Sunday Night”, a weekly Christian variety show on the order of Prairie Home Companion, but I had never really sat for a minute to hear him. He did a 45 minute concert of skits and songs during the lunch hour Saturday may very well stand head-to-head with Les Miserables as the greatest arts presentation I’ve witnessed. It’s not easy to get me to cry, especially during lunch hour. But my emotions were completely in his power during the riveting performance. He did a song of a little boy on a plane flight to see his Dad for the summer. That was the one that sent me over the edge. Other memories – a song “Teach Me To Dance” sung to a Dad by his daughter; a boy watching TV, a father talking to a daughter who’s found she’s pregnant, and the most remarkable bit – a simple reading of John nine, straight from the text, amplified solely by his incomparable acting ability. The lunch I’ll never forget.

Richard Allison died a few years later of cancer, a young man with a family, so much talent, vibrant faith and a bright future. Similar to Keith Green who died in August of 1982 at the height of his powers and popularity. As Dietrich Bonhoeffer watched students of his die on the front lines in World War II, he wrote, “Who can comprehend how those whom God takes so early are chosen? Does not the early death of young Christians always appear to us as if God were plundering his own best instruments in a time in which they are most needed? Yet the Lord makes no mistakes. Whomever God calls home is someone God has loved.” Keith Green and Richard Allison were indeed believers who understood that ‘faith without art is dead’. And their ‘early’ homecoming has been a reminder to me to truly seize the day.

February 3, 1993. What I found particularly inspiring about Richard Allison’s performance was it gave new life to an idea I’ve long wanted to develop: a concert package made up of skits and songs. Such an ambition is completely dormant at present, and the way I’ve developed the gift of music in my life suggests to me that it’s a charade anyway – but perhaps one day God will ignite the spark of creativity that yet remains. All I know is that every time I come across an artist who is employing his gift – it moves me to return to the drawing board. Right now, I seem so incredibly busy, I have difficulty finding 10 minutes to apply psoriasis medication twice a day (no, the psoriasis is not gone, and no, finishing seminary did not give me a windfall of free time). But is this now the niche in life I have carved out for myself? Have I nothing else to do? No place else to expand? Will I spend the rest of my life writing sermons on Tuesday and Wednesday, and visiting people on Thursday and Friday? Don’t misunderstand me – I’m very happy doing what I am doing, but it’s just that these songs I’ve written and the writing talent I lay claim to rises up to beckon me from time to time. If I continue to ignore them, the day will come when they rise up to mock me.

Fascinating to come across this entry and realize that God was beginning to ‘trouble the waters’ of my heart to write. It wouldn’t be long from this point where I would sit down in earnest to begin work on ‘Ben-Hur: The Odyssey.” It’s interesting though how great creative earthquakes in our lives often take months, even years of little tremors before the shift from apathy to action at last comes. I don’t believe those months are wasted time though. Working on a heart is God’s speciality – but it takes time.

February 4, 1993. In addition to feeling the prod to write, the idea of looking beyond the horizon for our next chapter of ministry had begin to surface. We loved our friends and church, but knew that rural ministry was not our ultimate landing place. This was one of the first times the thought made it to paper.

Winter has shown itself relatively tame this year. A couple weeks ago we had a solid foot of snow on the ground from a succession of snowfalls but this week we’ve enjoyed four straight days of 40° to 45° temps forcing Hannah and I to post a “condemned” sign outside a sizable snow tunnel we dug not too long ago.

It was a bit distressing though to hear the local forecasters hail this as the long awaited winter thaw. I’m sorry but a ‘winter thaw’ is not a few degrees above freezing. But apparently in Minnesota it means you can walk outside without longjohns.

However, it is becoming easier to daydream a little about our next place of residence, and we will probably be drawn (if the choice is up to us) to a more moderate region where winter is counted by weeks and not months. I took a step toward easing the hostilities with winter last week when I went snowmobiling with R. and J. on a 50 mile trek. So far my efforts to talk Janis into getting a snowmobile before a horse have fizzled.

February 5, 1993. After two years of burying people, I finally get the chance to marry a couple. Next Saturday I officiate at the wedding of J.H. and B.B. who started coming to the church along with the Open Door refugee movement. This gives me an opportunity to strengthen a ministry-muscle area that is up till now been anemic and neglected – that of marriage and family counseling.

I literally had no clue as to what to give to a couple seeking marriage before J & B came to me. Thankfully there is an abundance of exceptional resources available to help a pastor put together a balanced and effective premarital counseling program. I now have 5 to 6 week program available to offer an engaged couple.

What is been helpful about this process has been the push to wrestle with several issues that I had not encountered before. Should I marry a non-Christian couple? Am I obligated to perform a wedding for anyone who comes to me? What type of preparatory work do I ask of an engaged couple? Perhaps the greatest truth that has crystallized for me through this reflection is that my primary task is not to perform weddings but to nurture marriages.