Now Where’d I Put That Momentum?

Momentum is a funny thing. Once you catch it, it can be like a long wave you can ride on. Once you lose it, it can take forever to find it again. This is true of the fitness of our bodies or our churches or our habits. The key? To keep at it, and don’t quit. Fake it till you make it. This journal entry I wrote back on January 22, 2007 was of encouragement to me today. I hope it will be to you.

The body is a funny thing.  It gets into ruts and rhythms.  For the longest time, my weight has hovered in the low 190s, and even in times of little eating bursts, it quickly resets back.  Then around mid-December, the real holiday eating took over and for a good month, it was eat, drink and be merry for tomorrow we die.

A week or so ago, Jan and I applied the brakes.  She has a new love interest in her life named Tony (Horton), who’s created a program called P-90 and I’m getting on the bandwagon to a degree. I’ve even started a “food log” to start to get a handle on my eating habits (akin to a budget).  So for 4 days, I’ve been reasonably good, keeping the calories down and balanced – yet my weight hasn’t budged a bit (still 196-197 range).  Not a quick recovery this time.  Whassup? My thought is that once you set the body’s engine to fire in a certain way, that it must take awhile to reset the sucker. So rather than be discouraged, I’m going to lower my shoulders and press in even harder.

I imagine the same is true of church life.  It too gets into ruts and rhythms.  When we were growing for those five or six years at Grace, the momentum was real, and it seemed to perpetuate itself.  Once the boulder starts, it just kept on going.  But now we’re stuck – going on ‘3½ years of tribulation’, as it were – and resetting the church’s metabolism seems futile.  Yet like a body, if you apply yourself to healthy habits, the change will come.  It must come.  Exercise, strengthen the lean muscle, trim the fat – things should turn. We had our second quarterly meeting last night – and I was struck by the number of positive steps we have taken, the outreach efforts that will be taken, and yet it seems we have so little to show for it these first six months.  Perhaps there is encouragement to be taken from the good apostle Tony Horton.

And let me draw one more lesson in encouragement from Peyton Manning. For years he has been the NFL’s most talented quarterback, and for years now, he has fallen short of consummating his talent in the Super Bowl, usually because of the New England Patriots.  So there he was yesterday toward the end of the first half in the AFC Championship finding himself down 21-3.  He could have packed it in and allowed the weight of history, of fate, of inevitability to roll over him.

But he kept applying himself, kept pressing, kept at it – and he took his boys down the field at the end of the first half and they managed a field goal out of it.  A sliver of light.  A small beginning.

They got the ball first in the second half, drove the field again, and punched it in.  They did it again next time, and tied the score.  Then a setback.  A long Patriot return set them up for an easy 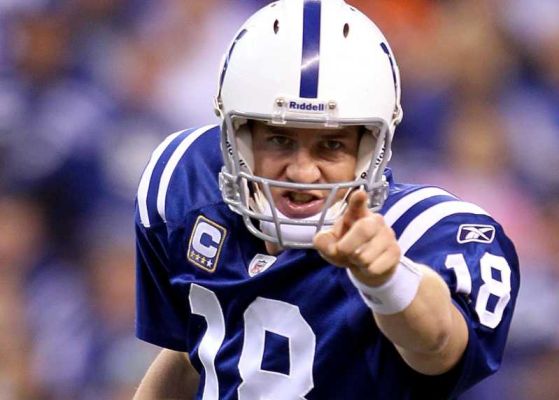 touchdown drive, 28-21.  Well we tried boys.  We made it respectable. Right?  Nope.  Manning led his team on yet another touchdown drive.  The Patriots answered with a field goal.  Manning refused to stop, and with 3 minutes left, found a way to cross the goal line again, and the Colts had shrugged off the boulderous monkey from their back.

So you just can’t quit.  You just can’t give it up.  In writing, in ministry, you must lower your shoulder and press on.  If God forbids you to cross the Jordan at this juncture, then get your nose smack back up against the shore.