Why Science And Faith Need Each Other – Part 3

Though they may seem like the oddest of odd couples, we’ve been making the case for why science and faith need each other. In two earlier articles (here and here) we explored why faith needs science. Let’s flip it around. Why does science need faith?

Evolutionary biologist and atheist Richard Dawkins in his book The God Delusion scoffs at the idea, and argues that people of faith are a menace to society. He even openly speculates on the possibility of removing children from the homes of believers. In an interview for “Wired” magazine, he said, “It’s one thing to say people should be free to believe whatever they like, but should they be free to impose their beliefs on their children? Is there something to be said for society stepping in? What about bringing up children to believe manifold falsehoods?”

Dawkins is not alone. He represents an intellectual militancy among atheists. Neuroscientist Sam Harris, in his book “The End of Faith” argues that unless humans shake their fetish for religion, religious violence will soon destroy us all.

People like Dawkins and Harris say in so many words, Let’s abolish faith altogether and let science reign supreme!  Dear God in heaven, help us from a world like that. Here are two reasons why science needs faith.

Faith provides moral boundaries to govern the use and practice of science.

The scientists in Nazi Germany performed brutal scientific experiments on thousands of her prisoners of war.  Why?  Because they could.  The Nazi materialistic worldview allowed it, and there was no one to stop them.  If science is all about learning how things work, and a Nazi scientist said, “Hmm, I wonder how much cold a human body can withstand before it dies?  I know! I’ll hook up monitors to a Jew, throw him into freezing water and study how long it takes him to freeze to death.”

Simply put, this is a scientific quest.  And studying that very question might yield some helpful information that might benefit humanity.  But we would all agree, though the quest is scientific it is also profoundly, disturbingly immoral. 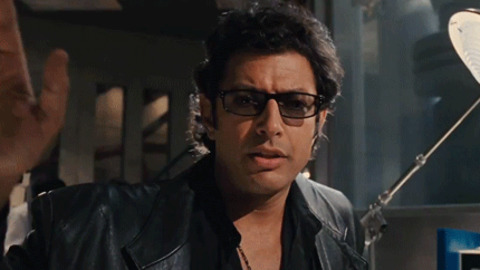 But where does the idea of morality come from?  Not from science.  Science is the study of how things work in the physical world.  Any notion of what is moral – of what ought to be done – must come from somewhere else, outside of us.  The “ought” must come from faith.

Remembering your “Jurassic Park”, it’s what Malcolm shouts out after their first tour to see the dinosaurs. “Scientists were so busy wondering if they could, that they forgot to ask if they should.”

More than a few scientists are bugged and bothered that religious types and ethicists are always nagging them.  Always holding up red flags.  Always mucking up the works.  Slowing them down.  And thank God for that.  Because if we don’t, who will?  We have more than enough science fiction movies and books to serve as warnings of what can happen if science is given a green light to do whatever it wants.

Because science alone can never heal all the hurts and satisfy all the longings of the human heart.

A human is far more than a body and a brain. Science will never be able to find the heart, the soul, the spirit, the will, let alone God under a microscope.  (They can find parts of the brain that are activated by our souls; they can study what happens to us physiologically when we worship, or when we meditate, or when we forgive. But the soul itself will elude them.) This is why all science can invariably do when a human experiences aches and pain is to prescribe a pill, or an equivalent remedy. But what if the ache comes from loneliness or unforgiveness or guilt or anxiety or lust or a hundred other afflictions of the soul?

Science, especially bad science today, is always trying to diminish humanity, or strip us down to our barest, lowest animal-like nature, telling us we’re nothing more than a part of nature. But it’s worse than that.

Bad science and mad scientists committed to naturalistic explanations of the world are doing their darndest to kill God off. And pull the rug out from under faith. But they can’t do it.

Belief in God is not the problem today. As if only more people would get over their love-affair with the Deity then this world would be a better place. Sorry, but not believing in God creates its own darkness and despair. (How many tens of millions have been slaughtered in the past century by atheism-fueled Communism?)

It’s not belief in God that’s the problem. It’s belief in the wrong God.

The belief in God – understood properly – is one of the most ennobling, life-giving, love-promoting, peace-inspiring, joy-producing, hope-creating beliefs that there is.

The God who came to earth in the person of Jesus Christ is just that sort of God. You don’t have to worry about one of his worshippers popping off a suicide vest in one of your meetings. You gotta watch these rascals, because if a group of them comes into your town, they might just open up a soup kitchen, or starting caring for the poor.

Worshippers of this God – and I have 2,000 years of history backing up what I’m going to say next –  have been a blessing to this earth. The world has been made richer, safer, saner, lovelier, healthier and happier because followers of Jesus Christ are here.

Some of you reading this now are aching inside, and you’re going to need more than a pill to soothe that ache. You need to come home. You need to come running into the arms of the God who made you. You need to admit who you really are – that you’re more than an animal, or a random, accidental freak of nature – you’re a fallen king or queen, and your true destiny awaits you, but you must first admit your rebellion, acknowledge your foolishness, and lay your life at the feet of the one who died on a cross so that you can be forgiven and begin again.

And if you do that, the spiritual side of you that has been so dark will be filled with light and love again. Science is your friend, but Jesus is your Lord. Fall down and worship Him who died to set you free.