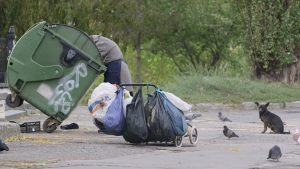 In Genesis 16, Abram’s story takes an unfortunate turn. Though God had promised Abram and Sarai a son from whom would come a nation that would bless the earth, ten years into their waiting, they ran out of patience with God.

Back then, in that corrupt culture, it was a custom that if a wife was infertile, then she was expected to provide a surrogate for her husband, to perpetuate the family line. So Sarai, rather than listening to God, listened to the sinful culture (which still happens today) and gave Abram her servant Hagar to sleep with. (In case you’re wondering, Abram doesn’t get a pass here. In fact, he was twice as responsible to hold the line, because he’s the one who had the visions from God. Poor Sarai could only ride on her husband’s faith.)

Their sin leads to the birth of a boy they name Ishmael, who in time becomes the patriarch of the Arab nations, which in time will enter into perpetual “step-brother” conflict with the Jews (again, which still happens today).

It’s an important principle for every child of God to learn – that living by faith still requires our obedience. The Puritan writer Richard Sibbes said, “Sin always leads to a declining state.” Translation: Disobeying God always weakens us, and sets us up for struggle which we were never meant to have.

Many Christians stumble on this because they are taught (rightly) that we are saved by faith alone, not by our works. But then they turn around (wrongly) and draw incorrect conclusions from this. That holiness is for “extra credit”. That I can kick back and coast the rest of the way to heaven. That I can sin my head off and God must forgive because I have my get-out-of-jail-free card.

But the Bible makes it clear that while we are not saved by good works, we are saved for good works (Eph.2:8-10). Obedience is meant to “come from faith” (Rom.1:6). The only thing that counts, Paul said, is faith working through love (Gal.5:6). Our good works are the fruit of faith, which prove if the seed of faith is in us (Matt.7:18-20). If we truly repented, then we are to bear fruit in keeping with that repentance (Matt.3:8).

We drove by a grove of fruit trees on the way to Sequoia National Park the other day, but couldn’t tell what they were. My daughter said, “Without the fruit, you can’t tell what kind of tree it is.” That’s the point.

The whole purpose in Christ dying for us was not only to provide a way for us to be forgiven of our sins, but to be set free from our sinning. If you’re serving a prison sentence and you get pardoned, are you going to ask the warden as you’re leaving, “Warden, if I find that I’m missing my jail cell, can I come back here and sleep at night?” If you’re a brand new butterfly, are you going to sit around and mope because you can’t crawl around in the dirt like a worm the way you used to. “And for Pete’s sake, do I really have to fly everywhere?!” If you’re a beggar on the streets eating the scraps that restaurants throw in the dumpsters, and a rich aunt leaves you a million dollars, are you going to buy a dumpster that you can put in your new mansion, so you can have a snack every so often?

Sin is such a wretched thing, why would you even consider hanging onto it? If you’ve become a true follower of Christ, then your life is going to change. And you’re going to want it to change. Let’s hear no more foolish chatter of, “My, now that I’ve been saved by faith, I get to do whatever I want!”