Advent Day 2: He Will Save Us From Our Sins

“But as Joseph considered these things, behold, an angel of the Lord appeared to him in a dream, saying, ‘Joseph, son of David, do not fear to take Mary as your wife; for that which is conceived in her is from the Holy Spirit. She will bear a son, and you shall call his name Jesus , for he will save his people from their sins.” ~ Matthew 1:20-21 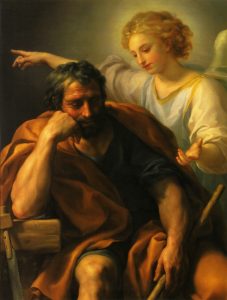 There was a guy who once prayed to God, “Lord, so far today I’ve done all right. I haven’t gossiped. I haven’t lost my temper, or been greedy, or grumpy, or nasty to my wife and kids. I haven’t told a lie. I haven’t used a swear word or had a lustful thought. I’m really glad about that, Lord. But in a few minutes, I’m gonna be gettin’ out of bed. And from then on I’m gonna need a lot more help.”

I’m sure we can relate to that prayer. As followers of Christ, we know that our Lord Jesus gave us forgiveness when he died on the cross. But now, does Christianity have anything to offer that helps me to be able to stop doing the things that need forgiveness? When the angel said to Joseph that his child would save us from our sins, what exactly was meant by that?

Thankfully, it is both. We are “saved” from the guilt and condemnation of everything my sinful heart, mind and body can conjure up over a lifetime of foolish and selfish living. The offer of forgiveness is arguably the greatest gift God’s grace in Christ gives us.

But we are also “being saved” from all the defects within me that make me prone to sin. (See 1 Cor.1:18, and note the grammar.) The Son of God was born into the earth that first Christmas to launch an all-out moral rescue mission that when it was accomplished, would transform us into beings that could live and love like him.

So Paul, after reminding the Corinthians that ”Neither the sexually immoral nor idolaters nor adulterers nor men who have sex with men nor thieves nor the greedy nor drunkards nor slanderers nor swindlers will inherit the kingdom of God”, could say in his very next breath “And that is what some of you were.” Again, note the grammar. (Who woulda thunk that taking English as a kid would make us better Bible readers!)

“And that is what some of you were.”

That doesn’t mean that this change comes easily. It cost the Lord Jesus his life just to put us on the pathway to transformation. And the Bible tells us that there’s a load of cross-bearing and dying to ourselves that awaits us. Jesus is going to have to train us to be godly.

Take anyone who struggles with sexual issues. Our sexual desires and drives are some of the most powerful forces within us. I saw a bumper sticker once that said: Sex is like pizza. When it’s good, it’s very good. When it’s bad, it’s still pretty good. So turning those desires toward a healthier destination isn’t going to be easy. (So the Church must learn to demonstrate great compassion to all the broken souls that pass through our doors seeking help. Especially the sexually broken.)

But if this child born that first Christmas is going to save me from my sins, then think about it! Your past is not your destiny. Your family of origin doesn’t get to bully you your whole life. Culture doesn’t get to call the shots. All the wrong you’ve done, and all the wrong that’s been done to you, doesn’t get to have final say in who you are. There’s a new sheriff in town. His name is Jesus Christ and he gets to have the last word in the lives of those who belong to him.

How’s that for a great big Merry Christmas?