Advent Day 4: We Can Be Masters Of Our Sexuality

“When Joseph awoke from sleep, he did as the angel of the Lord commanded: he took his wife, but knew her not until she had given birth to a son. And he called his name Jesus.” ~ Matthew 1:24-25 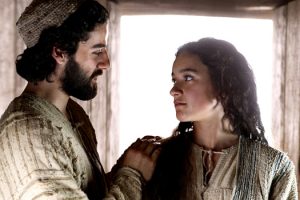 Of all the options Joseph had out on the table of what to do with his “Mary problem”, going ahead with the marriage was probably the one he discounted the quickest, because it never really occurred to him that Mary was telling him the truth. That’s why an angel was no doubt required at this moment. Sometimes God speaks in a still, small voice. Sometimes he must use a sledgehammer.

And then verse 25 – “But he knew her not until she had given birth.” Which means even though they were now legally married, he didn’t have sex with Mary until the pregnancy was over.

We can only speculate on why this was what they decided to do. It’s not that sex is bad or unholy. Our sexuality is one of the most beautiful gifts God has given us. (And forget about any suggestion that Mary remained a virgin the rest of her life. Scripture is clear, Jesus had siblings. Mary and Joseph played pattycake after Jesus’ birth – if you remember your Roger Rabbit.)

What we see happen in the Bible though is that there are times when God gets very, very close to us – and everything we have, everything we are, everything we do is laid at his feet, including our sexuality. When Israel first approaches Mount Sinai to receive God’s commandments in Exodus 19, God tells the people to “consecrate themselves” in preparation for this awesome moment. One thing God specifically says is “Abstain from sexual relations”.

Not that sex is bad. But God is better. And he needs your focus right now. I think that’s what’s going on here. That Mary’s pregnancy is such a holy thing, such a God-thing, that they decide either with God’s direction or all on their own that they’re not going to mess around with what God’s doing by messing around, if you catch my drift.

However, having said that, don’t think this was necessarily an easy thing for Mary and Joseph to do. They’re two hormonally-charged, love-sick, young people who were now legally married.  Yet Joseph and Mary were masters of their sexuality.

All day long we are bombarded with the message that purity is not possible. Everybody’s doing it. It’s unnatural to restrain your natural urges. Just give in to it.

Well, no it’s not impossible. You don’t have to sink to everyone else’s level. You can attempt difficult things and achieve difficult things. The potential is in you, because God put it there.

And Exhibit A is Mary and Joseph.