Called To Be A Peacemaker: 7 Steps To Practice 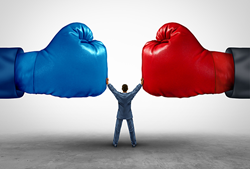 So how do we then practice Christlike peace-making? Here are seven steps to consider.

Step One – Talk to God before talking to anyone else.

In Psalm 59, David writes, “Deliver me from my enemies, O God; protect me from those who rise up against me…Fierce men conspire against me for no offense or sin of mine, O Lord. I have done no wrong, yet they are ready to attack me.”

David wrote many psalms like this, where in the midst of conflict, he first vents by crying out to God. His reflex was to hit his knees first, not hit back first. That needs to be our instinct also. Prayer isn’t the only thing we do, but it should be the first thing we do.

Step Two: Commit to seeing the other person the way Christ sees you.

“From now on, therefore, we regard no one according to the flesh,” Paul instructs us (2 Cor.5:16). The world’s way of conflict-management usually means dehumanizing the other person.  We call them names, we question their intelligence, we gossip behind their backs, “She’s this,” “He’s that”, “They’re the other thing.” We’re not to act this way if we’re Christians.

In peacemaking, we’re to see the other and treat the other as Christ did with us. He saw us as God’s image-bearers. He saw us not as we were, but as we could be, should God’s grace have its way with us. He came offering forgiveness, not punishment. Mercy, rather than judgment. When Christ commands us to love our enemies, this is what he means, and he modeled it first in the way he treated us.

Step Three: Talk to the person you’re in conflict with before you talk to anyone else.

Matthew 18:15 – “If you’re brother sins against you, go and show him his fault, just between the two of you. If he listens to you, you have won your brother over.”

The world’s way is to talk to everyone but the one you’re at odds with. How often I’ve seen it happen in churches that whispering campaigns and letter-writing campaigns and back-room politicking go on long before any one-on-one conversations take place. The devil has a field day with such behavior. It destroys churches, small groups, friendships, marriages.

James 1:19 – “My dear brothers, take note of this: Everyone should be quick to listen, slow to speak and slow to become angry.”

Listening allows the other person to share their heart. And those feelings that come pouring out – whether they’re rooted in reality or not – need to be validated. Philippians 2:4 says, “Each of you should look not only to your own interests but also to the interests of others.” It’s in my best interest to know what interests you. To find out what makes you tick, smile, cry, or come alive.

I may not understand or agree with everything another person feels. But I can show compassion for what they are feeling. Who knows, but perhaps in the listening, I may learn something about myself that I was blind to, and that contributed to the problem. Which leads to a fifth step.

Step Five: Confess your part of the problem.

Own up to any contribution you may have made to the disagreement. Don’t manufacture something just for the sake of keeping the peace, or to manipulate the other into confessing his wrongdoing, but be honest. Be humble. The Bible says God gives grace to the humble. And in that grace that he gives you, you are likely to find forgiveness and reconciliation.

(Ephesians 4:15) Harsh words, raised voices, slammed doors have no part in being a peacemaker. “As far as it depends on you, live at peace with everyone.” (Romans 12:18)  Scripture commands us again and again to be gentle. Proverbs 15:1 – “A gentle answer turns away wrath.”

Part of speaking the truth in love is a reminder to attack the problem, not the person.  Rick Warren writes: “You cannot fix the problem if you’re consumed with fixing the blame. You must choose between the two…You will never get your point across by being cross… If you say it offensively, it will be received defensively.”

This again comes from Rick Warren who writes: “We can re-establish a relationship even when we are unable to resolve our differences. Christians have legitimate, honest disagreements and differing opinions, but we can disagree without being disagreeable… God expects unity, not uniformity, and we can walk arm-in-arm without seeing eye-to-eye on every issue.”