Christ – It’s Not A Swear Word 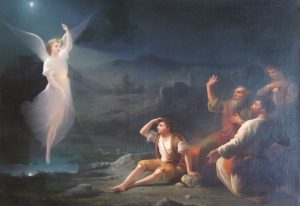 Christ. It’s one of the most prolific swear words used in our culture today, which is a travesty once you discover the richness of this word. “Be not afraid,” said the angels to the shepherds, “for to you is born this day in the city of David a Savior, who is Christ the Lord.”

When the shepherds heard this announcement, they were so overwhelmed with joy that they threw aside their job security by abandoning their post and high-tailing it to Bethlehem. Why? The Christ was breathing upon the earth.

For the Jew, the word was magical. Christ is the Greek derivative of the Hebrew word “Messiah”. It meant ‘anointed one’ and ‘deliverer’. Initially, it was a word of respect for high priests and kings. It was only as Israel tasted the bitterness of oppression and exile, that the word began to grow in their minds and hearts. The prophets began to promise that the day would come when God would send a different kind of Christ, like David, but much, much greater.

The Christ would free the people from all tyranny and establish the rule of God over the earth. Of the increase of his government and of peace, there would be no end. Swords would be beaten into plowshares. The earth would be filled with the knowledge of the Lord as the waters covered the sea.  The wolf would lay with the lamb. The very creation would be transformed.

Of course, the shepherds – like most Israel – expected the Christ to be a great military warrior who would cleanse the land with the sword of all the nasty Romans. But that sort of Christ would never be able to bring about the conditions predicted by the prophets.

If you surrender your life to Jesus the Christ, God won’t chase the Romans out of your life either. Your problem neighbor will still be there in the morning. You’re prodigal child will still be wandering. If you have arthritis, your joints will still ache. Life might seem grim.

But give Christ the freedom to go to work on your heart, to cleanse you of sin and teach you a new way to live, and your world will start to change for the better in breath-taking ways. And who knows, but he might teach you new attitudes and behaviors to take care of that neighbor and child as well.

A Savior has been born for you, who is Christ the Lord.