Christ’s Return: Why Will It Be A Day Of Mourning? 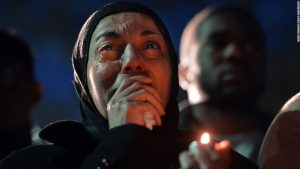 As we continue to consider Christ’s second coming in this week’s Sparks, a third question comes to mind: How will the return of Christ be received?

Scripture is very clear on this and the news is not good. John writes in Revelation 1:7, “All the peoples of the earth will mourn because of him” echoing the words of an Old Testament prophet named Zechariah, who foretold a time when Israel would mourn when they “look on the one they had pierced”.

Why this mourning? Because when Jesus Christ is seen visibly, physically, in the heavens – in that one indescribable moment it will dawn on people in a flash what is happening, but it will be too late. Too late to repent. Too late to change. Too late to get right with God.

The Bible says in Hebrews 9:28 – “Christ was sacrificed once to take away the sins of many people; and he will appear a second time, not to bear sin, but to save those who are waiting for him.”

Back in the frontier days of the Old West, a story was told of a young man who risked his life to stop a runaway stagecoach heading straight for a cliff, and in that stagecoach was a little boy. The little boy grew up to become a lawless bandit, and one day he stood before a judge to be hanged for a string of violent robberies. The prisoner looked up and recognized the judge as the man who – years before – had saved his life. So he pled for mercy on the basis of that experience.

But the words from the bench silenced his plea. “Young man, then I was your savior,” replied the Judge. “Today I am your judge, and I must sentence you to be hanged.” One day Jesus Christ will say to those who refused him, “During that long day of grace, I was your Savior, and I would have forgiven you. But today I am your Judge.”

To those who are not ready, the Bible tells us that the return of Christ will come suddenly, unexpectedly, like a thief in the night. “While people are saying, ‘Peace and safety’ destruction will come on them suddenly, as labor pains on a pregnant woman and they will not escape.” (1 Thess.5:2)

9-11 was that type of morning for America. Here we were minding our own business, getting kids off to school, heading off to work, drinking our coffee, enjoying that beautiful late summer sunshine – thinking to ourselves that this is life, this is how is should be, this is how it works – never dreaming that all of it was just an illusion that would soon come crashing down around us when the towers fell. And then we realized that life was actually very different than what we were pretending it to be. And there was much more to life than what we had thought of it.

The return of Jesus Christ to earth will have that same sort of impact. Here we are minding our own business, living life, punching our time clocks, maybe throwing God a bone every now and then, maybe doing him a favor every so often by showing up at church, but never actually imagining that the stories about Jesus were real. And the things that Jesus said and taught were true. I mean, if I had really thought that…

But then in a flash, in a twinkling of an eye, we’ll realize that life is actually very different than what we were pretending it to be.

If you want Jesus to bear your sins away, if you want to have forgiveness and get right with God, then now’s the time to do it. Once he returns, it’s game over, everyone out of the pool – too late. I pray you’ll not be among those who will be found mourning on the day Jesus returns.