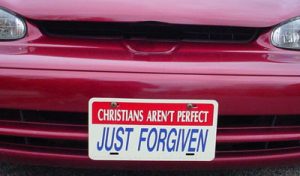 You’ve all seen the bumper sticker (perhaps you have it on your car) that reads: Christians aren’t perfect, just forgiven.

Have you ever thought that one through? It suggests that the only difference between a Christian and a non-Christian is the matter of forgiveness. It’s could be seen as a conciliatory way of saying, “Hey, we’re just one of the boys, not all that different from you.” But is that the only reason Jesus died on the cross – to provide mere forgiveness?

The Bible tells us that forgiveness was available in the Old Testament. “There is forgiveness with you, that you may be feared.” (Ps.130:4). The problem in the Old Testament, and in fact, the problem with human beings to this very day, is that we continue to do things that leave us with the need to be forgiven. We’re drunk in our sin. We are unable to walk a straight and moral line.

“Create in me a clean heart, O God!” David cried out. The ancient Jew came to see that they needed a new covenant, because time and again they kept breaking the old one. Amazingly, the prophet Jeremiah foretold that God would one day institute a new covenant with us, where not only would forgiveness be granted, but God’s laws would be written on our hearts (Jer.30:31-33).

When Jesus passed the cup at the Last Supper, he said to his disciples, “This cup is the new covenant in my blood” (Luke 22:20). In other words, The death that I will soon die will inaugurate the coming of the New Covenant.

Christians in a very real sense identify with Christ’s death, burial and resurrection. “We were buried therefore with him by baptism into death, in order that just as Christ was raised from the dead…we too might walk in newness of life.” (Romans 6:4).

That identification means that I view Jesus’ death as…

And the result of this? Forgiveness, yes. But so much more. Forgiveness so that I can be…

And this is how Jesus – crucified, died and buried – makes possible newness of life. He saves me from my sins, but also from my sinning. As I walk in this new relationship I have with him, and learn how to rely on and respond to the leading of his Spirit – over time (this will not happen overnight) I will start to look like, act like, and sound like Jesus.

So if you have that bumper sticker on your car, I think you now know what to do with it.