The Glory Of God In Christ 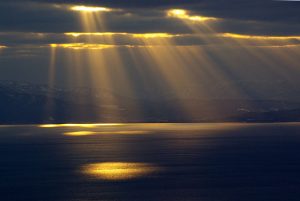 Psalm 145:11-13 says, “[Your saints] will tell of the glory of your kingdom and speak of your might, so that all men may know of your mighty acts and the glorious splendor of your kingdom, and your dominion endures through all generation.” To have a kingdom, you must have a king. And the glory of Almighty God and of his kingdom has been revealed to us finally and fully in the King of Kings Himself, Jesus Christ. “We have seen his glory,” wrote John in his gospel (John 1:14).

This talk of a glorious kingdom isn’t just pious language. When the Bible talks about God’s kingdom, something should leap within your heart. You see God is not content to leave this earth as it is. This brokenness we all see – he will heal it.  This rebellion we see all around us – he will end it. This sin and death that is everywhere – it will be no more.  God will bring the glory of his kingdom and the rule of his king to this earth.

The invasion began millennia ago when God took that little Hebrew tribe and brought them out of slavery to Egypt. The invasion of his kingdom intensified when God took that little runt of a shepherd named David and raised him up to be king over his people, who would be a symbolic prototype of the coming king. In fact, the prophets went one better. The coming king would come from the actual lineage of David. The prophets added other glimpses of what he would be like. Where he would be born. How he would treat people. The power of his miracles.

Then suddenly it happened, D-Day, the pivotal moment in human history when God threw the whole weight of his kingdom against the sinful powers of this earth – the day when Jesus Christ, God in human flesh, died upon a Roman cross, and at that moment the powers of hell, death and Satan were overthrown.  And now, spread over the entire earth even as we speak, God has established outposts of his kingdom, little platoons of his faithful ones, each given a holy task: to tell others of the glory of God’s kingdom and his King, and to live out as best they can the values of that King.

And if ever you doubt your faith, or doubt that this is really true, then just look at Jesus, and your doubts will soon fade away. For who is like him? Explain away Jesus, and then and only then will I abandon my faith.

Explain away his perfection. He did not sin. You read the gospels. Tell me where he sinned! Mohammed sinned. Joseph Smith sinned. Buddha sinned. Moses sinned. They’re all mere men. Not Jesus.

Explain his perfection. Explain away the greatness of his power to me. This one who could still a storm with his words. Who could cleanse a leper instantly with his touch. Who could send a legion of demons fleeing with just a command.

Explain away his goodness to me. He lived in the first century A.D. but he was not from the time and culture. Look at the way he treated women with respect. Look at his love for children. Look at him touch the leper’s skin. Look at his compassion for the poor. “The Lord upholds all those who fall and lifts up all who are bowed down” David wrote, and that’s who Jesus was.

Explain away his resurrection to me and I will abandon my faith. Explain how the stone was moved. Explained how his small band of frightened followers who denied him, betrayed him and ran from him became in just a matter of weeks an unstoppable missionary force of love and goodness, which soon overspread the entire Roman empire.

Look at Jesus my friend, the personal revelation of God himself, and your sins will be forgiven, your doubts will wash away, your despair will melt, and your life will never be the same again.