God The Father: Wants To Be Close To Me 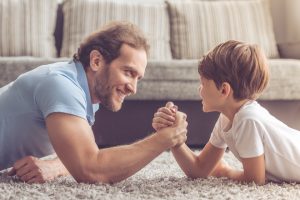 A third truth we learn in calling “Father” is the truth that God wants to draw close to me.

It’s no exaggeration to say that God wants you to be a son or daughter in his family. Galatians 4:6 – “And because you are sons [and daughters], God has sent the Spirit of his Son into our hearts crying ‘Abba! Father!’”

This word Abba is a tender word that a child would use to speak of their father. It means Daddy! Papa! It’s the word you’d use as you leap into the arms of your father to hug him. As you jump onto the belly of your father on the floor to wrestle with him. Jesus  wants you to know that God loves you like that.

For a Jewish worshipper walking the streets of Jerusalem 2,000 years ago, when Jesus appeared and began referring to God as his Father, it was shocking. It’s not the way Jews worshipped back then. Each way they turned, the Jew raised in the Old Testament perceived a stark separation between him and God.

To worship God, they first had to physically come to the temple. Once at the temple, you couldn’t even walk in without first offering some sort of sacrifice. Once inside, if you weren’t Jewish, forget any chance of getting close to God – for you there were bleacher seats in a separate court outside the temple. And if you were Jewish, you’d better be a man to get the best seats.

Then let’s say you were lucky enough to get front row seats at the fifty-yard line of the temple. Do you think you’re getting closer to God? Tough chance! You still have the priests in the way. And above all, between you and the Holy of holies, that sacred place in the temple where God’s glory was said to dwell, was a thick woven veil, forever excluding you from direct access to God. And you weren’t even allowed to use God’s name in prayer. That beautiful name God had given Moses with which to speak to him – “Yahweh”, or “I Am” – Jewish tradition warned against using that name.

Picture now if you will, Jesus walking on the scene, calling the Almighty, Unmentionable, Unapproachable God, his Father. Why did Jesus do this? Because he was trying to remind the people of a great truth that they had forgotten over the years because of their tradition – the idea that God wanted us to know him and to be close to him. It was right there in their Bibles. Verses like Jeremiah 3:19, filled with longing from God, where God says, “How gladly would I treat you like sons…I thought you would call me ‘Father’ and not turn away from following me.”

Their tradition wasn’t all wrong. It’s important to know that there were true, necessary, biblical reasons for the sense of separation the Jew felt back then. Each of these were powerful reminders to God’s people that God was holy, and they were not, and they couldn’t just come running into God’s presence any way they chose. The sacrifices pointed to the truth that sin’s high cost needed to be paid, but not by humans. God would have to come and pay the price. But once Jesus paid that price, a bridge of grace and forgiveness was thrown down between God and humanity. Which now by faith, any person could cross.

Including you and me. You’re just a prayer away from the most necessary, and powerful relationship you have ever known. A relationship with a God so close that he invites you to call him, your Father. Cry out to him now.