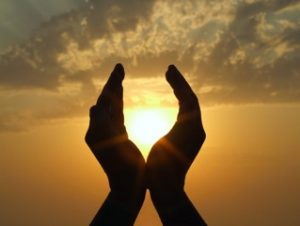 David writes in Psalm 145:7-10, “They will celebrate your abundant goodness and joyfully sing of your righteousness. The Lord is gracious and compassionate, slow to anger and rich in love. The Lord is good to all; he has compassion on all he has made.”

Here is where the need for faith kicks in. To say that God is great seems undeniable looking at this vast creation. But to say God is good isn’t so easy to say. To say God is good can sometimes stick in the throat. For how can a good God allow some of the things that happen in this earth?

Furthermore, skeptics say to us, “You Christians can’t have it both ways. You can’t say that God is both great and good. Looking at the world as it is, if God were great, then he must not be good, because otherwise he’d use his greatness and power to stop this madness. Or if God were good, then he must not be great, because a good God wouldn’t stomach this. He’d stop it at once. You can’t have it both ways?

Of course there are answers to explain this enigma. The Bible is not silent about this. We live in a broken world, cursed by sin. We live in a rebellious world, deceived by Satan. If God swooped in like Superman to stop every evil person from committing evil, or to catch every plane in which an engine failed, or to deflect every bullet that was fired, in no time at all human freedom and human responsibility would cease to exist, and we would be no better than birds in a cage.

Of course God intervenes at times, of course there are times he answers our prayers in wondrous ways, there are “signs of his kingdom” all around us. But life on this side of heaven will always be what Thomas Hobbes called it: short and brutish.

And yet, think about it. You think we have it bad! David lived 3,000 years ago. No anesthesia.  An average lifespan of less than 50. No x-rays to find the sore tooth, and no dentists to get the sore tooth out. Get a kidney stone, it would kill you. No ice cream. You had to walk everywhere.  Plagues of smallpox were routine. No electricity. Winters came long and hard. No hot showers.  You think your underarms smell bad now? The threat of invasion from the Philistine next door or the Assyrian a thousand miles away was always looming. And if those armies didn’t come, the locusts always would. No refrigeration. Eating pretty much the same stale food each and every day.

Yet it is a man from this time and this place who wrote, “The Lord is good to all; he has compassion on all he has made.”

How could he write these words? He didn’t make it up, I promise you. The made-up gods are the ones like the Greeks and Romans worshipped, or the Canaanites – their gods were very made up; they were mean and nasty, they fought with each other, they lusted over each over, they treated human beings like playthings. They were just extensions of human nature.

That’s why I know they were made up. But this God David writes about, this could only be revealed to David by God Himself. There’s no way that David could make this up. David looked at life on this side of heaven and compared us to a vapor, to evening grass, to a morning mist.  That being the case, David knew that the only way he could safely navigate his way through life was to reach out and take the hand of his great and good Creator.

And what blew David away was that when he reached up for that God, he felt a tug on the other side. He felt God’s embrace. “What is man that you are mindful of him?” David would write in Psalm 8.

I encourage you to reach up for that God today. Even now. Seek him. He is good, and waiting for you.