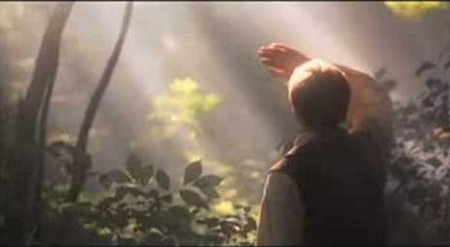 Recently Joy Behar, a TV host on The View made waves by claiming that Christians who claim to “hear God’s voice” are mentally unstable. With one fell swoop,  Behar mocked 2,000 years of Christian history, and slandered millions of Christians alive today who claim to have a “relationship” with God.

More than 2,000 times, the words, “The Lord said,” appear in our Bibles. The Bible makes no bones about it – God speaks. Jesus said, “My sheep listen to my voice; I know them, and they follow me.”

To believe that God speaks today requires our belief in several assumptions.

First of all, that there is a God.

You have to believe that God exists before you can believe that God speaks. A scientist pointed his finger at God once, and said, “You don’t exist! I don’t believe it!” So God said, “Okay, if I don’t exist, then I challenge you to a man-making contest.” “You’re on,” said the scientist, and he at once knelt down to scoop up a handful of dirt. “Wait a minute!” God said. “Not so fast, pal.  You get your own dirt.”

Maybe your biggest hurdle is that you’re not sure if God is really there. Well, take a good look around you today. Let your eyes peer at the heavens. Reach down and finger some of the ground beneath you. Let your nostrils take in some of this fresh air. Let your ears have a listen.  He’s here, my friend.

The notion that God speaks today next draws upon the premise that:

God is a personal and knowable.

Maybe you believe in God, but to your mind, God is so far above us, so far away from us, that any idea of communication seems laughable. The Bible does agree with this idea, to a point.  Isaiah 55:8-9 say, “The Lord declares, ‘As the heavens are higher than the earth, so are my ways higher than your ways and my thoughts than your thoughts.” But notice – the Lord speaks this truth to us.

A greater being can speak with a lesser being. Animal researcher Shaun Ellis once raised three wolf pups by entering their world, howling like them, sleeping like them, even – and this is gross – eating like them. The wolves bonded with him.

Christians claim that our God is personal and knowable because he has entered our world in the person of Jesus Christ; he has stooped to speak our language.

Which leads to a third premise behind this notion that God speaks today:

God is loving and relational.

There’s a reason God has stooped to speak to us. Because he loves us and desires to have a very real relationship with us.

In John 14, Jesus says, “He who loves me will be loved by my Father, and I too will love him and show myself to him.  If anyone loves me, he will obey my teaching.  My Father will love him, and we will come to him and make our home with him.”

It’s amazing, that God wants to show himself to you and me. He wants to make his home with us.

This is relationship language. Most people, when they think of God think of religion. They think of doing enough religious stuff and doing enough good stuff so that they might catch a break with God – who is out there somewhere.

But God doesn’t want your religion. He wants you. If you do religious stuff, and your heart doesn’t come along for the ride, you’re just playing a game, and God will not play along. True Christianity is not a religion; it’s a relationship. A relationship where the living God can speak to the creatures he made. Including you.