“He Ascended Into Heaven” 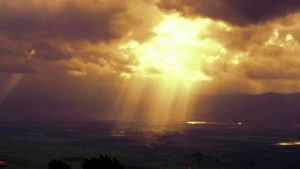 “…he ascended into heaven…”

Why after his resurrection didn’t Jesus march straight to the Temple, present himself to his enemies and rub their noses in it with a big, fat, “I told you so!” Why instead did he hide away with his disciples for the next 40 days, and then, to their dismay, ascend into heaven? Why did he leave us?!

When Jesus first mentioned that he would soon return to the Father, Peter at once resisted the thought. “Lord, where are you going?” he asked (John 13:36). Here the disciples had left everything to follow him, and now he was going to leave them? Are you kidding me? Not to mention the fact that by this time they enjoyed him, loved him, needed him – the thought of all that ending disturbed them to no end.

John 14 through 16 is where Jesus attempts to comfort them, by explaining why his leaving was necessary. First, his ascension to the Father was preparation for something far greater. “Let not your hearts be troubled,” he says as chapter 14 begins. “I go to prepare a place for you. And if I go and prepare a place for you, I will come again and will take you to myself, that where I am you may be also.” (vss.2-3). So the disciples could be comforted with his promise that this goodbye was only temporary. And that the good they enjoyed in his presence was just a foretaste of something far greater that was coming.

Second, his ascension to the Father would only be a partial separation. “I will not leave you as orphans; I will come to you,” he tells them (John 14:18), referring to the coming of the Holy Spirit. The Holy Spirit would be the same as Jesus living within them. “He will teach you all things and bring to your remembrance all that I have said to you…My peace I give to you,” (vss.26-27).

Thirdly, because of his ascension, power would be given to them that they would not experience otherwise. It would be a heaven-sent power to “do the works that I do, and greater works than these will he do, because I am going to the Father,” (14:12). In fact, if he didn’t leave, this (for reasons he does not explain) could not occur. “I tell you the truth: it is to your advantage that I go away, for if I do not go away, the Helper will not come to you” (16:7-8).

For me, this is the key to understanding the ascension. The first time my Dad took me driving I remember him saying, “OK, your turn,” and telling me to get into the driver’s seat. It seemed too much and too hard. I thought to myself, “No, Dad, I can’t. Why don’t you just drive me around everywhere for the rest of my life. That would be better.” I’m sure it was similar to what the disciples felt. “Jesus, you’re turning the keys of your kingdom over to us?! You want us to drive? Are you nuts?”

But that was the point of the Ascension. And this is why Jesus does not come out of the tomb on Easter Sunday, and at once march to the Temple to confront the world. Oh he could have done that – he could have strong-armed the world into believing in him. But that’s never been God’s way.

The kingdom of God would take root and spread in another way. In a way that dignifies our humanity and respects our freedom. In a way that gives to Christ’s followers the incredible privilege of participating in the process. God’s way to spread his kingdom is not to bully us or terrorize us, or scream “Allah Akbar” as he holds a knife up to our throats. But to invite us, to woo us, draw us through messengers, whom he has commissioned with the task of loving this dying world back to life. And you my friend are one of those messengers.

And therein is the wonder – and the power – of these words, “He ascended into heaven.”