“He Descended Into Hell” 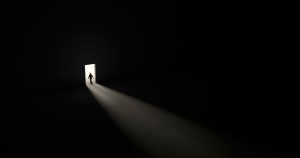 “…he descended into hell…”

Have you ever been to a place or experienced something that was so awful you said to yourself, “If there is such a thing as hell, it couldn’t be much worse than this.” (And no, being a Viking’s fan doesn’t count.)

If you talk to a vet from Vietnam or Iraq, I’m sure they could bring to mind quite easily images, noises, and smells which would qualify as being ‘hell-like’. The survivor of severe trauma or abuse lives there in part, and even in sleep, there is seldom escape.

In “The Voyage of the Dawn Treader,” Prince Caspian and his crew encounter the Dark Island, a black hole in the sea where not even light can escape. As they venture inside, they encounter a shipwreck survivor who warns them to flee the darkness. “Because here all your dreams come true!” he cries out. Once they realize that Dark Island is where all your dreams come true – not only your good dreams – they can’t escape fast enough.

The Apostle’s Creed reminds us that hell exists. Christ, in some fashion (Scripture is very vague in its description), stormed its gates and defeated its power when he died for us on the Cross. Jesus tells us that the fires of hell were prepared for the “devil and his angels” (Matthew 25:41), not for us. Yet the needless tragedy is that anyone whose name is not found in the book of life will be sent there (Rev.21:12).

Two quick warnings for the unbeliever and believer. First the believer.

The doctrine of hell should never be an easy one to digest. There are Christians who think nothing of casting the unrepentant millions into eternal judgment with a flick of their self-righteous wrists. I am deeply disturbed by any Christian who is not deeply disturbed by the thought of hell.

If we really believe in the existence of this awful place, it should unsettle us as nothing else. And if we see someone on the wide road that leads to hell, we should not ponder their fate with the casualness we use when talking about what colors to paint the bathroom. It should move us to find a way to warn them.

Jesus described hell with two metaphors: fire and darkness. Is Jesus speaking literally? If you say, “No”, be careful what you mean. Don’t think to yourself, “Well of course it’s not literal. Nothing would be that bad.” One of the tendencies of our fallen nature is that we’re always trying to minimize the effects of our sinfulness. We try to talk ourselves into believing that we can run our lives without God and still come out ahead.

But life doesn’t work that way. The fact of the matter is if hell is not literal fire and literal darkness, then it is much, much worse. Hell is literally eternal banishment from God. And to be banished from God is to be banished from Love, from Goodness, from Beauty, from Truth. The Bible is trying to tell us in the sternest way it can, like the shipwrecked survivor on Dark Island, “Move heaven and earth to stay clear of this place!”

Thankfully for all of us, because Jesus descended into hell, because Jesus took our judgment upon himself, because he suffered in our place, if we come to him in repentance and faith, all will be forgiven. “Whoever believes in him will not perish but will have eternal life”. (John 3:16)