He Shall Come To Judge The Living And The Dead 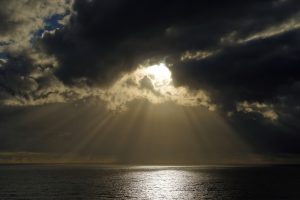 “From there he shall come to judge the living and the dead.”

The subject of the return of Christ to earth has stirred the hearts and imaginations of people since Jesus first spoke of it. It’s just one of those topics that captures peoples interest. Like sharks. Discovery Channel doesn’t put on a Pufferfish Week each year. It’s Shark Week that jacks up the ratings. Talking about “Christ’s return” or “the end of the world” has the same effect.

Whenever Jesus taught his disciples about the “last days” or spoke to them about “his return”, they became curious as preschoolers and peppered him with questions. “Lord, when will this be?” “Lord, are you at this time going to establish your kingdom?”

When the first generation of Christians heard Christ’s return taught, it excited them and agitated them at the same time. At Thessalonica, people started quitting their jobs and acting goofy. Paul had to write them and tell them to calm down. Down to our own time, the subject still grabs our attention. Remember the buzz about Y2K when the year 2000 rolled around?

At Christmas we celebrate Jesus’ first advent, when the Son of God was born as a babe in Bethlehem. But we do not do justice to our Christmas preparations if we do not also bear in mind his second advent.

The Bible tells us plainly, “But as it is, he has appeared once for all at the end of the ages [first Christmas] to put away sin by the sacrifice of himself…So Christ, having been offered once to bear the sins of man, will appear a second time [second Christmas] not to deal with sin but to save those who are eagerly waiting for him.” (Hebrews 9:26-28).

Neither should this eagerness be dependent on your life’s circumstances. If you’re getting married next spring, you’re no doubt hoping that Jesus will hold off just a bit. But if you’ve just become a widow or widower, your hurting heart is longing to see your Lord. (My mom tells me that once after having broken up with a girlfriend, I moped around the house saying, “I wish Jesus would come back.” I don’t remember that. Must of put that girlfriend out of my brain in a hurry.)

For me, eagerness for Christ’s return means my heart is filled with a rock-solid confidence that Christianity is true, and that Jesus is everything that he said he was.

Christianity doesn’t look at the unfolding of history the way Eastern religions do – the unending repetition of an infinite cycle (birth/death/rebirth) – over and over again, until somewhere, somehow you are able to escape the loop. Neither do we look at the human story the way naturalistic evolutionists do – the universe has been here billions of years before us, and will be here billions of years more after us, and our time on the stage is so brief that to say our existence has any true meaning is laughable; we are just a blip on the cosmic radar screen.

On the contrary, Christians see life as astonishingly meaningful, because each of us has been created by a very real and personal God. Because of this, history unfolds not as a never-ending cycle, or as some meaningless, random evolutionary chain, but as the outworking of a specific plan of God.

History is his story. And the human chapter we are in has a specific beginning and most definitely a certain ending. One day the author of this story will walk onstage, and like the old proverb says – When the author walks on the stage, the play is over.

Which for those who know and love the Author means the real adventure of life and love is only just beginning.

How’s that for a great, big Merry Christmas?