I Am Radically Called 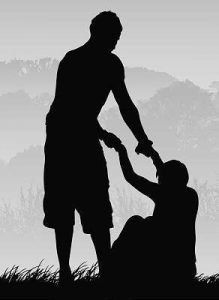 There’s a reason biblical Christianity swept away centuries of Greek and Roman paganism in a few generations – and no, it’s not because the Christians killed all the pagans. Christians had absolutely no power whatsoever for more than three centuries, yet it spread over the Roman empire like a wildfire. Why?

After years of swimming in self-esteem pablum, a lot of the little narcissists we’ve created have a hard time grasping the first truth, that we are broken and sinful. But truth is still truth. Take away our comforts and the props of civilized society, and just watch. Our world will become a Walking Dead universe overnight.

The second truth takes on its greatest meaning when you understand the first truth. In spite of the fact that we’re selfish little brutes who live short miserable lives, the God who created us sees in us such beauty, nobility, and worth that he launched the greatest rescue mission ever undertaken.

Now forgiven of his or her sin through Christ, the seeker of God then learns a third radical truth: that they are called to the most meaningful life possible and the highest destiny imaginable.

We are called to grow in Christlikeness and love.

This was God’s original intent when he created us. Ephesians 1:4 tells us that even before “the foundation of the word” God chose us to be “holy and blameless in his sight.” Then humans fell into sin and rebellion, setting up a little detour we call human history. But now in Christ, God returns us to the path of our original destiny. To grow in holiness and grow in love.

Now forgiven of his or her sin through Christ, the seeker of God is called to the most meaningful life possible and the highest destiny imaginable.

Our world is drowning in narcissism on one hand, and nihilism on the other. Nothing can lift us above these dreary philosophies more than the radical call that God places on us in Christ.

Jordon Peterson, a professor of psychology from the University of Toronto has become a rock star in our time, because of his message to his listeners to stop yelling for “freedom and rights” and instead follow the path of “truth and responsibility”.

First, we need to dispense of the “I’m a snowflake” nonsense by admitting our brokenness (Truth #1).

“It’s self-evident that we are flawed and there are things to be done about that,” he says.

But don’t stop there. Peterson then calls his listeners to listen to the call of God within them that they possess incredible worth to the universe (Truth #2).

“One of the highest moral obligations you have is to treat yourself like you’re a person of value,” Peterson says. “Recognize your divine worth.”

But don’t stop there. Now lift yourself up above your narcissism or nihilism and do something meaningful with your life (Truth #3).

“It’s self-evident that the world is a place of suffering and there are things to be done about that,” he says. “So become a force for good in this world.”