Called To Be A Peacemaker: Why It’s Important 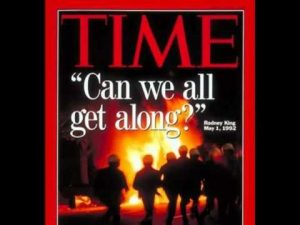 It was 25 years ago that Los Angeles exploded in race riots, after four police officers captured on videotape beating a black man named Rodney King were acquitted by a jury. In the violence that followed, 58 people lost their lives, 11,000 were arrested, and property damage exceeded a $1 billion.

During the storm of rioting, King himself came on TV and asked, “Can we all get along?” His question has sense morphed into an often-repeated cultural meme: Why can’t we all just get along?

The apostle Paul wrote to the Corinthians: “There are divisions among you, and to some extent I believe it. No doubt there have to be differences among you, to show which of you have God’s approval.”  (1 Cor.11:18-19). Disagreement comes with the territory of being human.

King’s plea was essentially the recognition that since we all share the same space, we need to find a way to figure out how to live in peace with each other. Because if we don’t, then we’re going to destroy each other sooner or later.

25 years later, it could be argued that our nation is more bitterly divided than ever, and that the tinder for another conflagration is very dry, just waiting for a spark to ignite it.

One thing is for certain – it is time for followers of Jesus Christ to step up and show our culture that another way is possible.

The Lord said it clearly in the Sermon on the Mount.  “Blessed are the peacemakers, for they will be called sons of God.” (Matthew 5:9)  The apostle Paul wrote in Romans 14:19 – “Let us therefore make every effort to do what leads to peace and to mutual edification.”

To edify means to build up. A Christian is to be in the business of building up, not tearing down. God’s counting on you, his child, to do everything in your power to hold things together.

God is in the business of reconciliation. He came to you when you were an enemy of God and built a bridge to bring you back home. “We were God’s enemies, [but] we were reconciled to him through the death of his Son…” (Romans 5:10).

Once the vertical reconciliation between you and your Maker is accomplished, then God sets us to work on the horizontal reconciliation that must take place between his children.  After all, the world is hardly going to hear our pleas for them to be reconciled to God if we remain at war with each other.

There may be no more essential work needed in our nation today. And nothing harder to achieve. But you as a child of God are to lead the way.