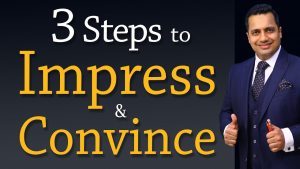 Scripture calls David a man after God’s heart because David’s instinct was to seek God regularly (i.e. daily) to lead his life. But he didn’t stop there. He then submitted to God’s leading.

After spending time with God through Bible study, prayer and worship, David would receive marching orders from God. And David would follow.

His predecessor Saul didn’t act that way. If God said, “I want the enemy completely wiped out,” Saul would keep back some of the best cattle for himself, then rationalize it in some way. Not so with David. He wanted to keep in step with God. If he won a battle one way, David didn’t assume God would do it that way the next time around. So each time he went into battle, David sought the Lord. And if God said, “Go left around the hill,” he went left. If God said, “Go right around the hill,” he went right.

For David, seeking God and then listening to God was his #1 strategy for success in defeating his enemies. “Be doers of the word, and not hearers only,” Scripture says (James 1:22).

Christians love “How To” books. They eat up teaching that promises seven steps to overcome anger. Or five habits to have a happy marriage. Or how to have you best life now. There’s nothing wrong with this, mind you. This sort of teaching can be very helpful. The Bible is chock full of principles. Jesus said if we’d only put his teaching into practice, we’d have a much better life in the end.

But Christianity offers the world more than principles. What we have to offer the world is a living Person named Jesus Christ, who invites us to come close and have an actual relationship with him.

Sometimes I think though that we prefer the principles to the Person. To follow principles is something that I can control. To follow a person, that’s another story.

Janis and I had a rough go of it early in our marriage. I remember when I began to really start praying about this. As I began my life as a pastor, I realized unless we got past some of these problems, I wasn’t going to be in ministry for very long. And so I started praying to God, “Lord, you’ve got to do something about my wife. You have to change her.”

No sooner did I start praying that way, than God started throwing it right back in my face. “Change her? Son, what about you?” And it really started to irritate me that every time I went to talking to God about Janis’ weaknesses, he wanted to talk about mine. But that’s what you get when you are dealing with a living Person.

Principles are easy. They can be followed or discarded. Dealing with a person though – you better fasten your seatbelts.

So sure, go to your seminars. Read the books. Pick the brains of those who have been-there-done that. But do not substitute any of these things for time spent sitting in the presence of your Savior, who will begin to guide your steps if you let him. And once you begin to detect his leading, then follow. You never will become a mighty man or woman of God like David without a submissive heart yielded to Christ.