Living Fearlessly: Know That You Have A Savior 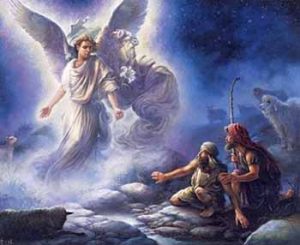 Well, that’s an understatement. Who would blame the poor shepherds? Somebody sticks their head in my office door when I think I’m alone, and they have to peel me off the ceiling afterwards. I need to start putting cowbells on people.

Once the shepherds manage to pick themselves up off the ground, the angel speaks again. Listen carefully to what he says.

Imbedded in these amazing words we find two powerful reasons for why life does not have to be top-heavy with fear. Reason #1 for why I should not be afraid – Jesus is my Savior.

A few years back were two brothers who owned a wrecking company in Connecticut. They began illegally dumping debris on the empty lots that surrounded their building.  Five years later they were finally caught. In addition to being handed a $900,000 fine, they were ordered to clean up their mess.

They worked on the pile for a year but barely made a dent in it. Little wonder. The mound of rubble they created covered two acres and was 35 feet high! Said one of the brothers, “It was never supposed to get this big.”

If the truth be told, we all need saving from one thing or another. We all find ourselves in fixes we can’t do anything about. Some of you are there right now. And these situations can fill our hearts with such unrest and fear.

Until we remember, a Savior has been born to you.

You might protest that God has much bigger fish to fry than you and your problems. That’s when you remember that the Lord’s angel spoke these words to shepherds – the lowest of the low in that culture. God doesn’t work from the top down when he does his saving. He starts from the bottom up. Your life very much matters to him.

Psalm 118:5 says, “The Lord is on my side; I will not fear.” Choose to believe those words today. And these words as well: “A Savior has been born for me.” Say those words over and over again throughout the day, then tonight as you drift off to sleep. And maybe you’ll get a good night’s sleep for once.