Why Memorize Scripture? It Ennobles Us 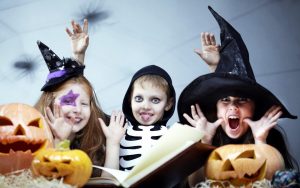 A couple of Halloweens ago, our church hosted a Trunk ‘r Treat in our parking lot for the neighborhood. I dressed up as a “writer”, and when the kids came by my car looking for candy, I playfully asked them to help me with my writing. “I’m thinking of a story from the Bible, but I can’t remember what it was called,” I said to them. “Maybe you can help me. Jonah and the…oh what was it? Jonah and the…” One child proudly called out, “Jonah and the Chocolate Factory!”

When I asked for help with David and…David and…,” I got back the same blank faces. “David and the Statue of Liberty!” said one, looking at one of our church members who was dressed up as Lady Liberty.

Maybe one out of fifteen kids got the answers right. Sure, the night was a lot of fun, but I came away so sad from the experience, to see first-hand how little of the Bible these children knew. Because I knew for a fact that without that knowledge, these children would grow up poorer.

A third reason we should memorize Scripture is this. Memorizing Scripture ennobles us. To ‘ennoble’ means ‘to lift up, to raise in dignity, to increase in value.’ The opposite of ennoble is to debase. To debase means ‘to cheapen, to lower the worth of, to strip of dignity, to make more animal-like.’

Why does Shakespeare continue to live on five centuries after he lived? Because his plays ennoble us. His command of language, and his grasp of the moral complexity of the human heart, woven together in timeless stories inspire us and warn us as few writers ever have.

This is why up until a generation or two ago, the Bible was taught in public schools. It was allowed, even encouraged, not because it made the children into better Baptists or Congregationalists. But because it made them into better human beings. It was recognized that there was something about the language and the stories and the poetry of the Bible that ennobled us.

In fact, so many of the great writers of Western Civilization, including Shakespeare himself, borrowed extensively from the Bible. It informed their worldview, and shaped their writing. So many of the great speeches we recollect today are bejeweled with Scripture.

How many today would know that when Abraham Lincoln said, “A house divided against itself cannot stand,” he was quoting Jesus. Or when Martin Luther King Junior referred to ‘justice rolling down like the waters and righteousness like a mighty stream,” he was quoting the prophet Amos. Even Professor Woerner, an atheist professor I had in college, became choked up as misty eyed as he recited Psalm 23, the words of King David penned 3,000 years ago.

Oh if those same mothers I met that Halloween night could see this. And would take the time to put their children on their knees and tell them over and over again the stories of Jonah and the Whale or David and Goliath. And teach them the Ten Commandments and the Lord’s Prayer. And most importantly, to tell them that Jesus Christ is not a swear word, but the greatest, most loving, most amazing person that ever walked this earth.