Why Memorize Scripture? It’s What God’s People Do 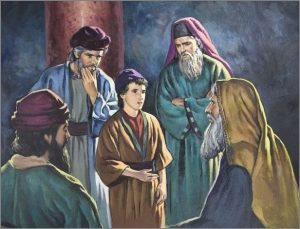 So why should I devote time to memorizing Scripture? Reason #1 is this: All of God’s people in Bible times devoted themselves to this, and Jesus led the way in setting the example.

What we see throughout Bible times is that it was simply assumed that God’s people would do this. Think of it – most of them didn’t even have access to God’s Word, so they had to memorize it when they heard it. You and I have no excuse for not being filled to overflowing with his Word.

So Joshua could say, as recorded in Joshua 1:8, “This Book of the Law shall not depart from your mouth,” because he assumed people had it already stored up in their hearts.

Moses could write in Deuteronomy 11:18 – “Fix these words of mine in your hearts and minds,” because he had the reasonable expectation that his listeners and readers would do just that.

Jeremiah said, “When your words came, I ate them; they were my joy and my heart’s delight” (15:16), which is a clear reference to memorization. David wrote in Psalm 40:8 – “I desire to do your will, O my God; your law is within my heart.” Can you say something similar today?

But above all these faithful saints of old, Jesus did it, and if Jesus did it, I need to do it. And you can’t say here in protest, “Well, you know Jesus was God, and so of course Jesus knew the Bible.” Sorry. Wrong answer!

Yes, Jesus is God in human flesh, but in coming to earth, Jesus ‘emptied himself’ the Bible says (Philippians 2:6-7) the idea being that he often refused to make use of his divine power. When he was arrested, he said to the soldiers who were tying him up, “Don’t you think I can’t call on my Father and he will at once put at my disposal more than twelve legions of angels?” When asked about the time of his second coming, Jesus said, “Dunno. You have to ask the Father.” Not because he didn’t know. He just refused to access that omniscient God-part of himself that would have known.

So in other words, Jesus knew the Bible not because, in Matrix fashion, he was born with it automatically downloaded into him. He had to learn it the same way we do. By being taught it as a child by his parents, by going to church, by committing himself to reading it and learning it as he grew old enough to do that. And by the age of 12, we see evidence that Jesus was already on his way to mastering a good cross-section of the Bible.

Thinking of Jesus at 12, I wish I could tell every 12 year old out there that you were made for more than just playing video games and knowing how to text at the speed of light. You’re selling yourself way short if that’s what you do with most of your time. And you’re selling your future short. You’re better than that. You’re not too young to start reading the Bible for yourself, learning its words and trying to live it out.

And adults – how about you set the example?