Prayer: The Christian Trail Of Tears 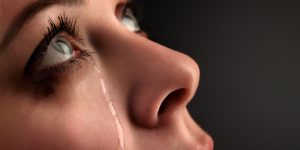 God has ordained three ways for you and I to establish a connection with Himself: the study of His Word, fellowship with other saints, and prayer. If you want to have great faith, then you must learn the disciplines of great study, great fellowship and great prayer.

Another thing God has done is provide in Scripture flesh and blood templates of how to grow in these disciplines. For example, Hannah in the book of 1 Samuel is a great prototype for how to be a prayer warrior (picture Diana from Wonder Woman but on her knees.)

Hannah is married to a man named Elkanah who also happens to have a second wife, because in this day and age, 1,000 years before the birth of Christ, polygamy was still practiced. The Bible is not condoning this behavior, it’s just describing it.

As you read the Old Testament, it’s clear that there were some sinful behaviors that God overlooked for a time while he worked on other sins. Polygamy was one of them. By the time of the early church, if you are not the husband of “one wife” you cannot serve in leadership in the church. Even King David would not have been a leader in the early church with his little harem. (It’s a reminder that God in his mercy never deals with all our sins all at once, or it would likely destroy us.)

But in time, God will burn this demeaning and disgusting habit out of his people. And we can see what’s inherently wrong with polygamy in the story of Hannah itself, with the emotional rivalry that’s set up between Hannah and Elkanah’s second wife, Peninnah. Polygamy does not make “big love”, no matter what Hollywood says. It’s hollows out love, in a most ugly and destructive way.

And for Hannah, it’s made all the worse by the fact that she is barren.  Penninah is cranking out babies right and left, while Hannah can’t bear children. And on one of the annual pilgrimages which Elkanah and his family made to a place called Shiloh to offer sacrifices to God (Jerusalem wouldn’t become Israel’s center of worship for another 75 years at least), Hannah reaches her breaking point.

She comes into the holy tabernacle of God where the high priest Eli and his two sons were in charge, and she falls before God and prays. ! Samuel 1 tells us:

“In bitterness of soul Hannah wept much and prayed to the Lord…As she kept on praying to the Lord, Eli observed her mouth. Hannah was praying in her heart, and her lips were moving but her voice was not heard. Eli thought she was drunk.”

Hannah was weeping as she prayed. When was the last time you showed that kind of emotion as you prayed? Or any emotion? There’s a trail of tears that every Christian should leave behind over the course of their lives as they grow up in the Lord.

A Christian should first learn to cry for their own sins and failings. If you’ve never wept in repentance before the Lord, I seriously doubt that you know the full depth of your sin, and the full measure of God’s grace to you in Christ.

Secondly, a Christian should then learn to cry to God for their own needs, as Hannah is doing here. Such emotion shows that you recognize how desperately you need God in your life, and without him you are lost. If you’ve never wept in need before the Lord, I suspect it’s because you think you’ve got everything under control. That’s a slippery and dangerous place to be at.

As you grow up in Christ, and start to see things through his eyes, there’s a third set of tears you will cry. This time, it’s not for your own sins, and own needs. A Christian should also be moved to pray for the sins and needs of others. When you can cry for the lost ones around you, when you can weep for our nation as it drifts further and further away from God, when you can start to do without your very food for the sake of intercession, when you start to lose sleep for the sake of prayer – now you’re starting to grow up as a child of God.

And the Christian trail of tears has one final stop, one last place where every true Christian will weep – when they stand before Jesus and see him face to face.  Then let those tears fall for those will be tears of the greatest joy you will ever experience.

And then the Christian trail of tears will end, for Revelation 21:4 says that Jesus will “wipe every tear from our eyes. There will be no more death or mourning or crying or pain, for the old order of things will have passed away.” The first lesson Hannah shows us is that every Christian should leave behind a trail of tears.