Spiritual Growth: It Starts As A Seed 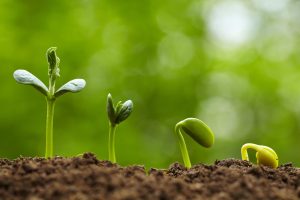 Because he ministered in an agrarian culture, Jesus told many agricultural parables in his teaching. (Back in Big-Boy’s School, they called this “contextualizing” which is a basic principle for effective speaking: know your audience.)

Let’s not get too far ahead of ourselves though, and miss an essential principle for anyone who wants to grow in Christ. Spiritual growth starts as a seed. In other words, it takes time.

Leonard Ravenhill tells the story of a group of tourists vacationing in England, who were walking through a little village one day. They passed an old man sitting in a park, and one of the tourists, being a wise guy, called out, “Old chap, were any great men born in this village?” The old man replied, “Nope, only babies.”

It’s true for all of us, isn’t it, and let’s not forget that. Sometimes we look at the Bible and we see Moses parting the Red Sea, David slaying Goliath, Elijah taking on the prophets of Baal, Peter preaching thousands into the kingdom with one sermon, Paul scattering demons and diseases with his prayers, and rather than be inspired by them, we’re intimidated. They’re so far above us, we think. But that’s not true.

One of the things that encourages me when I read the Bible is to realize how many of the great heroes of faith arose out of obscurity, after spending years in the wilderness, out of the limelight. Before Moses marched into the royal hall in Egypt to face down the Pharaoh he spent 40 years in the desert. Before David conquered Goliath, he spent years as a shepherd. Before John the Baptist started crying out, “Prepare the way of the Lord!” he was eating locusts in the wilderness. Before Paul began his prolific missionary career he spent more than fifteen years in his hometown of Tarsus.

What were they doing during these years? Just faithfully serving and seeking the Lord. Worshipping. Staying in fellowship. Reading their Bibles. Doing ministry. Fighting off sin. Telling others about the God they loved. And with them scarcely noticing, the seed of faith in them was growing.

Were any great men and women born in your church? Nope. Only babies. Babies in whom a wonderful seed gets planted. The greatness comes by nurturing that seed.