The Cross: Freed From Sin, Death and the Devil 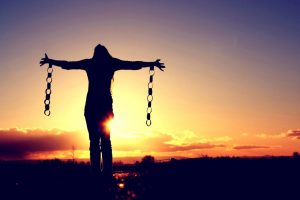 The third gift I am given at the Cross is Redemption – which means I am freed from the power of sin, the devil and death.

Whereas justification is a word pertaining to the courthouse, redemption is a word that pertains to the ancient marketplace, where slaves were bought and sold.

When God brought Israel out of slavery to Egypt, he described it as a redemption. “I am the Lord, and I will bring you out from under the yoke of the Egyptians. I will free you from being slaves to them, and I will redeem you with an outstretched arm.” (Exodus 6:6)

Centuries later when God brought Israel out of the slavery of exile to Babylon, he used this same word to describe what he was doing. “Leave Babylon, flee from the Babylonians!  Announce this with shouts of joy and proclaim it…say, ‘The Lord has redeemed his servant Jacob.” (Isaiah 48:20)

Isaiah then introduces a new word to add to the mix: the word “ransomed”.  Isaiah 51:11 – “The ransomed of the Lord will return. They will enter Zion with singing; everlasting joy will crown their heads.” (Isaiah 51:11)

If you’ve read the beautiful love story of Ruth, you find that Boaz functions as a liberator called a kinsman-redeemer He does not allow Ruth to continue in slavery, but purchases her freedom and wins her love.

Of course, all of this Old Testament language is preparing us for Jesus, who used the language of redemption and ransoming to describe his mission. “For even the Son of Man did not come to be served, but to serve, and to give his life as a ransom for many.” (Mark 10:45)

Perhaps you’re doubting the idea though that you are in bondage to anything. The religious leaders in Jesus’ day insisted, “We have never been slaves to anyone!” (John 8:33). But this isn’t true at all. Jesus then showed them three things they were captive to:

Why you can’t even live up to the moral standards you’ve set up for yourself, let alone God’s. Right now I can find dozens of articles on marriage on my Flipboard, filled with principles for how to have a good marriage. But more than half of marriages still fail, and Millennials these days are avoiding it like a plague. We need redemption from our sin.

Jesus tells the religious leaders next, “You are unable to hear what I say. You belong to your father, the devil, and you want to carry out your father’s desire.” (John 8:43) Go ahead; try to keep an evil thought or temptation to do wrong from entering your head. You can’t do it!

The idea that a personal force of evil exists is laughed off by many today. Franklin D. Roosevelt could not comprehend the Nazi atrocities uncovered after World War II until he read the Christian philosopher Kierkegaard. Only then could Roosevelt grasp “an understanding of what it is in man that makes it possible to be so evil.” Deny it all you want, but outside of Christ, Satan can grab a piece of your heart or mind any time he chooses. You’re in slavery – you need redemption.

A few verses later, in John 8:24, Jesus says with sober bluntness, “If you do not believe that I am the one I claim to be, you will indeed die in your sins.” Go ahead; try to keep from dying. You can’t do it! Why not? You’re in slavery – you need redemption.

“[Jesus] shared in [our] humanity so that by his death he might destroy him who holds the power of death – that is, the devil – and free those who all their lives were held in slavery by their fear of death.” ~ Hebrews 2:14-15

“For you know that it was not with perishable things such as silver or gold that you were redeemed from the empty way of life handed down to you from your forefathers, but with the precious blood of Christ, a lamb without blemish or defect.” ~ 1 Peter 1:18-10