The Cross – Glorification: Freed From Death 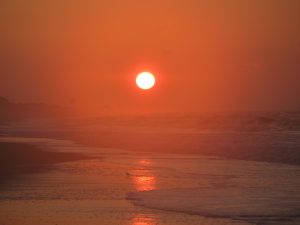 The sixth achievement of the cross of Christ is glorification. The cross will free me from death.

Glorification refers first to what happened to Jesus when he returned to heaven after his ascension. In coming to earth, Jesus set aside the “glory” that was his by nature, as God the Son. Paul speaks of Jesus “emptying himself” when he came to earth, even though he was fully “equal with God” (Philippians 2:6-7).

In praying in the Garden of Gethsemane before his arrest, John suggests that Jesus anticipated his return to that glorified state. “And now Father, glorify me in your own presence with the glory that I had with you before the world existed.” ~ John 17:5

When John first saw the risen Christ in Revelation chapter one, he fell down at his feet as though dead, such was the glory with which Jesus appeared to him. The obvious quality that comes to mind with the word “glory” is that of light. But the word connotes much more. Something at full glory is something that exhibits the fullness of its greatness. It speaks of something at the height of its power, beauty and fame. Something so magnificent, it leaves us breathless in wonder.

What’s stunning about the Bible’s use of the word is to realize that glorification is something which awaits every faithful follower of Christ. Jesus will share his glory with us.

“The Spirit himself bears witness with our spirit that we are…heirs with Christ, provided we suffer with him in order that we may also be glorified with him.” ~ Romans 8:16-17

Glorification is the final stop on the journey of salvation. Romans 8:29-30 – “For those God foreknew he also predestined to be conformed to the likeness of his Son, and those he predestined, he also called; those he called, he also justified; those he justified, he also glorified.”

If we had eyes of faith to see it now, my brothers and sisters – the glory that will surround us in eternity, in our sinless state! Perhaps it is the glory of God which clothed us in Eden before we sinned, glory which was shorn from us after our rebellion, leaving us naked and defenseless.

But because of Jesus’ death on the cross, we’ll be clothed in glory once again.

“Therefore, we do not lose heart,” Paul wrote to the Corinthians, and to us. “Though outwardly we are wasting away, yet inwardly we are being renewed day by day.  For our light and momentary troubles are achieving for us an eternal glory that far outweighs them all.  So we fix our eyes not on what is seen, but on what is unseen.” ~ 2 Cor.5:16-18.

You see then our need for the cross of Jesus Christ. For there would be no glorification if there were not first propitiation of the wrath of God, expiation of my shame and guilt, justification for all my cursed lawbreaking, redemption from my slavery, reconciliation from my separation, and sanctification of my empty way of living. All of this and more I find by kneeling at the cross of my Savior.

With Paul I pray for you to grasp “how wide and long and high and deep is the love of Christ” as revealed by the Cross. We’ll spend all eternity pondering its wonders, and never get to the bottom of it.