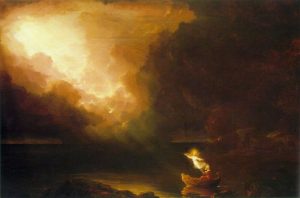 If you want to live life well, don’t forget this truth about time taught by Solomon in Ecclesiastes 3:

Remember that time is fleeting, but spiritual life is eternal.

The great 19th century Russian novelist Dostoyevsky was arrested in his late twenties for his membership in a group thought by the czar to be subversive, and was soon sentenced to death by firing squad. Dostoyevsky would never forget the horror of being dragged out to the execution area, lined up against the wall, kissing the cross of the priest, seeing the soldiers raise their guns toward him, listening to the drums beat faster and louder, hearing the orders to “Aim” given, and then to his astonishment, the guards put down their guns and marched away. The czar like to play such mind games with those he imprisoned. Dostoyevsky would remain imprisoned for a few more years, but from that moment on his life was changed.

He wrote a letter to his brother in which he said this: “When I look back on my past and think how much time I wasted on nothing, how much time has been lost in futilities, errors, laziness incapacity to live; how little I appreciated it, how many times I sinned against my heart and soul – then my heart bleeds. Life is a gift!…Now in changing my life, I am reborn in a new form.”

In the middle ages, God’s saints would often display skulls on their desks or on their shelves, actual real skulls, to serve as a reminder to them that they did not have all the time in the world, that their existence here would be measured and short.

I don’t own any skulls, but on the walls of my office at home hang four famous paintings – “The Voyage of Life” – by 19th century painter Thomas Cole.

The first painting is simply called Childhood, where we see a human life beginning his or her journey. The moment is filled with light and softness and innocence and possibility.

The second painting is called Youth. It is a season of chasing down your dreams, a time of vision and excitement and idealism and hope.

The third painting is called Manhood. The skies have now darkened, the quiet streams have become dangerous rapids, the gaze of the traveler is now heavenward.

The final painting is called Old Age where the only hope to be seen at all in the Traveler’s line of sight is the hope that is offered by eternity. In a way, these paintings are my skull. They’re my reminder that my time here on earth is limited and brief, soon to be swallowed up by eternity.

And why remind myself of this? Because I want to live my life on earth as richly, as honestly, as purely and as passionately as I possibly can. But to do this I need to call to mind often that time is so short and fleeting, because I was made first for Eternity.