The True Definition Of Inclusiveness 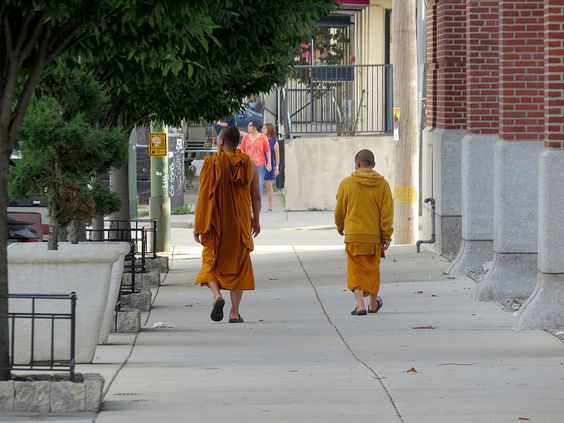 We live a stone’s throw away from a Buddhist meditation center, and it’s not unusual on a given day to walk by a group of orange-robed monks in the neighborhood. Knowing how to interact with people from other faiths is an important skill, especially today in a world that’s so divided and filled with venom.

There are two cheap and easy responses we can make, and one harder way that is modeled by Jesus in John 4 when he strikes up a conversation with a Samaritan woman.

One easy way out is to flippantly say, “I’m right, you’re wrong; I’m smart you’re dumb; I’m in, you’re out; I’m saved, you’re not” and leave it at that.  That would be easy and thoughtless.

Another easy way out would be to flippantly say, “You know, all roads lead to God, and we just need to learn to respect each other’s deeply held beliefs.  Who are we to judge someone else’s religion?”  That too would be easy and thoughtless. Not to mention, dangerous. If there is anything our post-9/11 world has taught us is that there is a great difference between religions, and we ignore those differences at our own risk.

If we’re going to get this right, then we’d better turn to Jesus’ own example to see how he interacted with those from other faiths. Thankfully, we get to see him up close and personal when he meets this Samaritan woman. And the first lesson he shows us is this:

Jesus wants his followers to be inclusive.

I almost hate to use this word – it’s been so abused and overused by more liberal Christians, but rather than throw the word out, let’s reclaim it.

To be inclusive as Jesus was inclusive means to accept the worth and affirm the dignity of another person regardless of their beliefs or behavior.

This Samaritan woman had great worth in Jesus’ eyes, and he proves it just by talking to her, which was doubly outrageous, for in that day and age, Jews didn’t speak to Samaritans, and men didn’t speak to women.

Yet to Jesus, here was a life created in the image of God. For that, Jesus showed her love and respect.

It’s even more surprising that he did this because of the immoral life this woman had led. She was married four times, and was right then living with a fifth man. Jesus knew all this, yet treated her kindly even so. I’m sure her self-respect hung by the thinnest of threads, if she had any at all.

We’re seeing today in startling colors the power men often wield over women. Jesus could have absolutely crushed this woman, but he reached out to her bruised feminine heart with such astounding gentleness.

This is what true inclusiveness is – it recognizes the God-given value a person possesses just by being alive, regardless of what they think or how they live.

We’re seeing today in startling colors the power men often wield over women. Jesus could have absolutely crushed this woman, but he reached out to her bruised feminine heart with such astounding gentleness.

Well no we don’t. As his conversation with the woman continues, Jesus points out to her where her life has gone astray, then offers her a better path to follow.

Any parent knows full-well what this is about, because they do it all the time with their children. Sure, there are times when any parent can understand how it is that some ancient religions practiced child sacrifice. (Be honest!) But instead a good parent accepts and loves their child warts and all – which brings them into a relationship with them. Then because of that relationship, they begin the work of turning this little monster of theirs into a responsible, disciplined human being. That’s Jesus’ idea of inclusiveness.

So when you cross paths with the Buddhist monk in his orange robe, or that bearded fellow in the grocery store who has the Sikh turban around his hair, the Jew with his skull cap, or the Arabic husband and wife who own that convenience store – remember that all of these are God’s image-bearers.

And our first response in crossing paths with them should not be anger, or mockery or condescension, but respect, love and affirmation, just as Jesus modeled it. And when you engage them in conversation your goal should not be to win a debate, but to win a person, a living, breathing person whom God loves, and for whom Jesus died.