Two Things Every Depressed Person Should Do 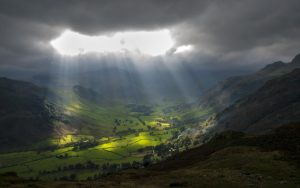 My first experience with depression came when I was in college. I was part of a cult-like “name-it-and-claim-it” church which taught that if you summoned enough faith, you would never be sick. Problem was, my body was covered with the sores of psoriasis, and I was a walking, breathing contradiction to this false teaching.

But I needed time to figure out that this teaching was false, and in that space of agony and reflection, I was locked up in depression. (It’s important to separate out depression that is caused by bio-chemical imbalances in the body from that which is caused simply by life’s weariness. There’s nothing wrong with accepting medications to help win this battle. We just need to be careful that we don’t short-circuit the work God would do in our hearts by treating symptoms, and not the underlying causes of the depression.) The story of Elijah in 1 Kings 19 offers helpful lessons for facing depression.

We see in how God tenderly meets Elijah here, that he gives him two vital things. First God gives him his presence. God comes to Elijah in his despair and speaks to him in a still, small voice, and asks him, “What are you doing here, Elijah?” God’s assurance to Elijah brings comfort. And God’s words to him bring clarity. Elijah had been thinking wrongly about God and his work. He thought that after his show-down with Ahab and Jezebel, everything would get immediately better. He thought that he alone was standing up against the evil in the land.

In the midst of my depression, I was filled with so much anger at God. In my times of prayer, I would literally yell out at God. Till the day came when I threw down a Bible on the bed in my disgust. At once I sensed something inside of me say, “Look down at the Bible.” I picked it up and looked straight at a verse and read, “I know your sitting down and your going out and your raging against me.”

I started to cry. It was the still small voice of God that I needed to hear. I needed God to say, “Son, I love you. What are you doing here? I’ve been with you all along.” I needed to know that God wasn’t rebuking me for my little faith. He was just saying, “Son, I know what you’re going through. And I am with you.”

The healing of my spirit began that very day. It took time. I had to get my theology on straight, that no, God doesn’t heal everyone, but often his power is made perfect in our weakness. And God brought a lot of people  into my life, including a beautiful woman named Janis who ministered to me in my depression (spoiler alert – I married her!)

It’s interesting what God gives next to Elijah. Second, God gives him a work to do. He sends him back into the world to anoint two kings, as well as his own successor.

Which is what God did next with me. He next directed me, “It’s time for you to get out of this church.” Which I did. I started worshipping with Janis at her church. And as God healed me – not my skin, but more importantly my heart and mind – I began to sense a renewed call from God to serve him.

I started teaching the senior high students in Sunday School. And got involved in leading worship. After Janis and I were married, we went to England, where we served for a year in a beautiful inner city church. God’s call in my heart grew stronger and louder. When we returned to the states, I enrolled in seminary. The call grew stronger and louder. Every person emerging from depression needs to know this – that their life matters and has purpose. That’s what I needed and that’s what God gave to me.

What’s the lesson here if you’re experiencing depression? Though everything inside of you may be screaming for you to do otherwise, keep yourself connected to God and his people. Don’t stop going to church. Don’t blow off your small group. Don’t stay holed up inside your house with the shades pulled down. Even though you don’t feel a thing, drag yourself out every Sunday and plant yourself in that chair. Give God a chance to comfort you and speak to you.

And secondly, keep serving. Keep helping others. It seems counter-intuitive, but Jesus insists that when we give our life away, we strangely end up finding life flowing back to us. In giving, we don’t end up depleted, but more filled. So again, even though you won’t necessarily feel it right away, step out in faith, or habit if need be.

In time, sooner than you think, God will appear. And joy will return.