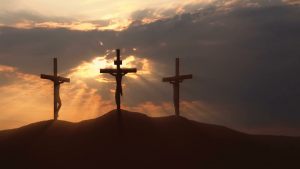 A great debate that has raged since Jesus died is the question: Who killed Jesus?

Matthew’s telling of Jesus’ trial has the Jews shouting out for his death, saying, “His blood be on us and on our children!”, a verse that tragically has been used over the centuries to justify a startling amount of violence against Jews.

Yet crucifixion was a Roman innovation, and only Romans were allowed to order it, so no matter how much hand-wringing and hand-washing the Roman governor Pilate did over Jesus’ case, at the end of the day, Jesus’ fate rested in his hands alone.

But the logistics of how Jesus ended up dead on that first Good Friday are actually missing the truth of the matter.

God the Son chose to go to the cross.  God the Father willed for it to happen.

The prophet Isaiah foretold 700 years before it happened: “Yet is was the Lord’s will to crush him and cause him to suffer.”

The apostle Peter in his very first sermon declared, “This man [Jesus] was handed over to you by God’s set purpose and foreknowledge, and you, with the help of wicked men, put him to death by nailing him to the cross.”  (Acts 2:23)

The Jews and the Romans were merely instruments in the hands of God, carrying out something which God had determined would happen before the world was even created.

In his first letter to us, Peter wrote: “You were redeemed…with the precious blood of  Christ, a lamb without blemish or defect.  He was chosen before the creation of the world.”  (1 Peter 1:18-19).

So when Jesus entered Jerusalem on that first Palm Sunday 2,000 years ago, he knew what was going to happen to him by the end of the week.  And the only reason that it would happen is that he would allow it to happen.  “I lay down my life…” Jesus said.  “No one takes it from me, but I lay it down of my own accord.  I have authority to lay it down and authority to take it up again.” (John 10:17-18).

The Romans didn’t kill him. The Jews were not Christ-killers. We all had our hands on that hammer as it swung down and drove the nails into his hands and feet. But in the final analysis, that wasn’t why it happened.

The only reason it happened was because God so loved the world that he gave his only Son.

Nails were not what held him to the cross. Love was what kept him there. Love for you and me.