If you watch a TV show tonight, take a look at all the people on the screen other than the principle actors. The pedestrians on the street. The patrons in the lunchroom. The students milling around the hallways. Look at every nurse, shopper and policeman. And the cars on the street. Even the shadows you see passing behind glass doorways.

No one “just happened” to stumble onto a TV set one day and were lucky enough to find their way on camera. Every single one of them is meant to be there, and is paid to be there.

Welcome to the world of the background actor (BG), possibly the most curious job I have worked (except for the summer I sold $400 sets of cookware to young, single women – I stunk at the job but had fun while doing it.)

So what’s a typical day in the life of a BG actor like? For starters, there’s nothing 9 to 5 about this. Every day is shaped by the needs of the particular production you’ll be working for. An actor’s “call time” (when he or she must arrive on the set) typically falls between 6:00 and 9:00 am (I’ve been needed as early as 4:30am and as late as 2:00pm, and for the strong of heart, there are “night shoots”.) 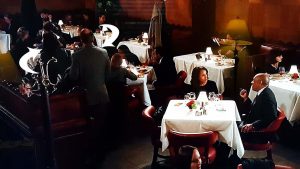 Me and my lady on the set of “Scandal”

Most shifts probably average out to eight hours. You sometimes “wrap” early. I’ve worked as little as three hours, but that’s rare. More often, you’ll be tacking on overtime. BGs are guaranteed an 8-hour paycheck ($96 for LA and its $12-an-hour minimum wage; double-time after ten) and you are contracted by the production company till their shooting is finished. I’ve just wrapped up a 3-day movie shoot with three straight 12-hour days.

Another novelty is that every day presents you with a different “office” to work in. You might work in any of the half-dozen big studios in Hollywood, but more than half the time, you’ll be on location around the city somewhere. Last week I reported to a nearby airport, to the world-class LA Biltmore Hotel, poolside in the backyard of a $3 million mansion, and to an abandoned hospital that was closed down a decade ago.

Once you report to set, you first check in and receive your all-important payment voucher, your Wonka golden ticket which assures that a week later, a paycheck will arrive in your bank account or mailbox.

From there, you navigate your way to “wardrobe” where the clothes you have brought are approved for the shoot, or an outfit is given you (many productions even arrange for “pre-fittings” where they will pay you for a couple hours to make a separate trip, days in advance, to be sized up for your wardrobe.) 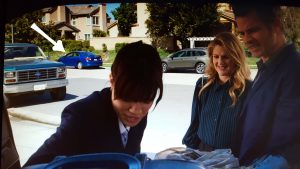 Our sporty Corolla on TV

Next, it’s on to the hair-and-makeup people to receive their blessing.

Once you get a thumbs-up from these fine folks, you take you and your stuff to an area called “holding” which is where you’ll hang out whenever you’re not on set. Usually, “holding” is little more than plastic chairs under a canopy, but this is the place where you can read, chat, play with your phone or stare off into space and ponder the fate of the universe.

Most productions will feed you a decent breakfast, and virtually all productions will provide what usually amounts to a very sumptuous 3-course lunch, and every production keeps stocked a “crafty” section of chips, cookies, fruit and coffee throughout the day. Our grocery bill definitely has gone down while doing this job, and the waistline keeps threatening to go up.

Then comes the moment when a production assistant sticks his or her head into holding and asks you to come to set.

Ah, let the magic of Hollywood begin. Which I’ll describe next time.