Do Your Characters Have An Inner Struggle? 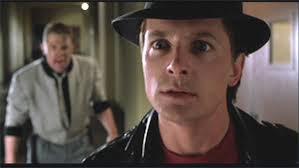 Tip 31 is this: Deploy characters that reveal both inner struggle and inner conflict.

It’s important to understand the difference between the two. JSB describes the inner struggle as something the character brings into the story. It’s part of their soul which is present before the story even begins.

The inner conflict is tension that is created by the plot of the story itself. It’s something which happens which strikes the bruise of the character’s inner struggle, and forces them to react, grow, or run.

Bell gives the example of detective Mike Hammer in the story One Lonely Night as he realizes that he takes a twisted pleasure (inner struggle) in chasing down and shooting the bad guys (inner conflict).

I’m sure you can come up with dozens of examples. It’s Marty McFly absolutely hating when someone calls him a chicken because of the inadequacy he feels in his family (inner struggle), but getting into constant trouble with Biff and others who bring out that rage (inner conflict). It’s Hans Solo overcoming his mercenary self-interest (inner struggle) to return to the fight and help rescue his friends (inner conflict). It’s Tom Cruise’s lawyer in “A Few Good Man” always opting to find an easy way to plea-bargain his case (inner struggle), learning to stand up for justice even though it’s Jack Nicholson’s colonel that he’ll have to face down (inner conflict).

Now imagine these stories if that tension were not present, and these characters had no internal challenge to overcome when facing the external threat. Imagine if they walked into the story fully developed, mature and capable. The stories would be hollowed out not only of entertainment value, but more importantly its emotional heart.

So go back into your stories, and re-examine your main characters, through this lens. See if you can identify what hidden demons and ghosts haunt them and weaken them from within.  It’s better when the heroic is not just described, but discovered.