Screenwriting Nuggets From The Frontlines 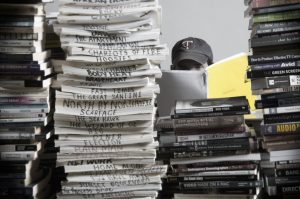 I attended a recent screenwriting symposium at CBS Studios hosted by Azusa Pacific University. A session by industry veteran Sheryl J. Anderson (known for her work on shows like Flash Gordon and Charmed), was filled with helpful tips and encouragement for the vast army of “emerging writers” that’s out there.

Some of her thoughts that stood out:

Be good people as well as good writers.

In the end, Hollywood is a small town and a person can get known with surprisingly speed, if not by their writing then by their attitude. I’ve found this to be true just from the little bit of background acting I’ve done.

If you find the work easy, then you’re not doing it right.

Whew! I must be on the right track then. I usually end writing sessions spitting at the mirror, breaking things, and filling out work applications to Walmart.

You don’t want to tell people you’re a writer till you have a few good scripts in hand.

The conversation usually goes like this. Someone up the food chain will ask you, “What’s your goal?” When you say, “Writer,” they’ll then ask, “Do you have a script?” Should they hear about it/look at it and like it, they’ll then say, “This is good. What else do you have?” In other words, don’t constantly be reworking one script over and over again.

How do you know that you have a good idea?

Most novice screenwriters should be able to answer this question. Answer: Can you wrap up your idea in a crisp logline? To create such a logline, answer these two questions:  Can you summarize the subject in one word? And can you summarize the theme of your story in one sentence?

Tips for the screenplay itself:

Finally, for Christian writers looking to inject faith in their stories, she offered this word of advice (to which I whispered a sweet amen): Be real. Don’t think inserting a Bible verse in the story makes it good writing. And don’t shy away from conflict (a besetting sin for many of us, which is odd since the Bible’s stories are filled with it.)