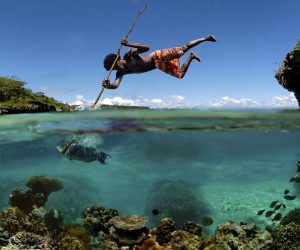 Tip #18 in the “Art of War for Writers” from James Scott Bell is: “Spear some fish.”

What he’s talking about is the art of generating ideas for our writing. Whether you’re writing sermons, blogs, or books, you know it’s true that if you wait till you sit down at the computer to figure out what you’re writing about, you’ll quickly become very frustrated.

Ideas are like fish in a stream, Bell says, and you need to spear them while you have the chance. When it comes time later on to make the meal (to bake the idea into your writing) you’ll have it on hand.

Where do we get these ideas? “You have to become an idea factory,” Bell says, then offers some specific pointers in how to get there.

First, you have to get them down on paper. Spear that fish! I find that ideas parachute into my mind while I’m out jogging, and they can be so vivid, it’s like they’re running alongside me. But if I don’t write it down right away, by the afternoon the idea is like a stray animal that has disappeared into the woods, and I’ll never see it again.

Then he takes the ideas he’s jotted down, and takes some time at the computer to play around with them. “I’ll expand upon them, brainstorming outward from what I have.” If you don’t clean the fish, if you don’t put some clothes on your orphan idea (the metaphor-mixing police will be after me for that one), if you don’t at least describe what it was that made the idea’s colors pop in your mind, you risk forgetting what made it special to you in the first place.

Then Bell puts the cleaned fish in the fridge overnight. He allows the idea to cool down. “This gives the boys in the basement a chance to work overnight while I’m sleeping.” Love that image!

If in the end you don’t utilize the idea, don’t throw it away, because the idea might become an element for a future project. I found this to be so true in sermon-writing, where a meaty thought I put in the freezer because it wasn’t suitable for my current series became the perfect addition for a future topic.

Bell says, “Get used to thinking this way, and your creativity will explode.”

What are some things you do to help generate ideas?