How Tom Brady Would Break Through Writer’s Block 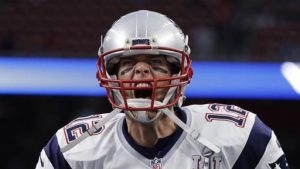 Watching the Super Bowl last Sunday reminded me of the power of momentum.

There are seasons like that as a writer. Where you’re eagerly at the computer, writing easily, gladly, daily. The Midas touch is yours.

But once you lose momentum, it can take forever to find it again. Ask the poor Falcons. How can something that was so easy an hour earlier suddenly become an effort in futility?

So what do you do? Well, what did Tom Brady do? I saw three things in the game which he modeled.

First, he kept stepping back onto the field until he found his rhythm.

He kept doing what quarterbacks do. He didn’t quit. Down 28-3, the Patriots went on a long, methodical drive in the third quarter where at last they scored a touchdown. Patriot fans everywhere we’re screaming at their TVs: Hurry up! Stop taking so much time between plays! But that drive was important to allow the Patriot’s offense – which had been pummeled by Atlanta up till then – to find itself. The writer who’s stuck must do the same thing. Keep taking the field. Keep typing. Put words on a page.

Second, TB didn’t allow reoccurring setbacks to hold him down.

After their first touchdown, they missed the extra point. Brady could have said, “There’s just too many bad-breaks rolling our way.” Atlanta then recovered the Patriot’s onside kick. “See, it’s not our day,” they could have said. But the defense made a critical stop, and down the field the Patriots went again. Just when they were inside the five, ready to punch it in again, Atlanta landed back-to-back sacks, forcing the Patriots to kick a field goal. 28-12. “It’s just too hard. Too deep a hole to climb out of.” But nobody said that. They chose to focus on the fact that they now only needed two scores to tie the game, rather than focus on the fact that they would have to cross the endzone four times to do it.

Attitude is everything, when you’re looking to build momentum. It’s not like Atlanta just folded up and rolled over for the Patriots. Atlanta made some amazing plays in the back half of the game. When Julio Jones made one of the most insane catches ever seen in a Super Bowl putting the Falcons on New England’s 22, the Patriots could easily have cashed in their chips. But they refused to allow any negative play to stop them. One sack and one holding call later, the Falcons had to punt. Needing 91 yards to tie the game, no one said, “It’s too far. I’m too tired.” Julian Edelman promptly went out and made his own insane, ridiculous catch.

Negative plays are a part of the writing life. The hits, the setbacks, the rejections just keep coming. We (for I’m preaching to myself here) must set our minds that we are not going to stop no matter what.

Third, once he found his rhythm, he poured it on.

Once the monster was awakened, Brady became an unstoppable force of nature. Every pass was a tight, beautiful spiral laid perfectly in the hands of each receiver. He was even composing music at one stretch, directing a receiver with a hand motion to cut up field where he then tossed a pass as feathery and beautiful as a hanging note from an oboe. By that point, the Falcons were toast. Brady was going to bring that trophy home.

I have this bad habit of getting into a writing groove and then calling it a day way too soon. I know I’m on a roll. I can feel it – the words are flowing like an ice-jammed stream suddenly let loose by an afternoon of sun. But then I’ll let it all freeze up again. Sometimes when you got it, you need to run with it. Forget about taking the walk. Dinner can wait. Pour it on. Let the momentum carry you along.

Do you struggle with finding, or keeping momentum in your art? What things do you do to keep battling when the chips are down? I’d love to know your thoughts.