Will They Love Your Lead? 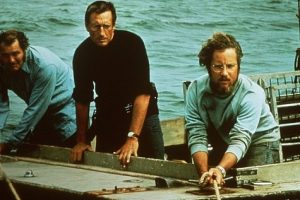 Tip 30 is this: The key to reader bonding is falling in love with your lead.

My wife Janis and I recently rewatched the classic Jaws, a movie that ruined summer for a generation, and set in motion an entire industry of shark movies. But no matter how many sequels and lookalikes Hollywood makes, none will surpass the Spielberg original. Because Hollywood thinks it’s all about the shark. But it’s not.

It’s about the three lead characters: Sheriff Brody, Hooper and the unforgettable Quint.

These three characters are so uniquely drawn, and so powerfully acted, that it doesn’t matter that the shark doesn’t show up for half the movie. We can’t take our eyes off the screen for watching these three.

JSB tells us that if you want to create great lead characters then note the following:

I can point to countless beats in Jaws where these qualities were present. Brody listening to Hooper and Quint show their war wounds, and opting to be silent. Quint’s harrowing revelation that he was aboard the Indianapolis. Hooper saying, “Ain’t got no spit” as he prepares to go into the shark cage to face off against the monster.

Leads can be hero or anti-hero or flat-out villainous (Heath Ledger’s Joker), but they must exhibit something that rivets our gaze upon them. Spend some time with yours today, and see how they match up with JSB’s criteria. How can you – thinking of Jaws – give them a little more bite?