I awoke yesterday to the news of the impending fall of Aleppo, one of the Middle East’s oldest and largest cities, and home for millennia to one of the earliest Christian communities. All of that is now on the verge of being erased, as Syrian troops loyal to President Assad and aided by Russian and Iranian military power finish their assault while the world looks on.

Stories of unspeakable horror drift outwards from the rubble. Women raped in front of their families. Mass firing squads. Torture. Suicide to avoid capture. All of it adding to the toll of the nearly 400,000 who have already lost their lives in the four year civil war. Saddened by the devastation and sickened by the carnage, I am reminded of how the first century historian Josephus described the fall of Jerusalem to Rome in A.D. 70. where starvation drove survivors to unimaginable brutality.

And how did the United States officially respond to this recent news. With a lecture. The US ambassador to the United Nations, Samantha Power, took to the microphone on Tuesday and scolded Syria, Russia and Iran.

“To the Assad regi 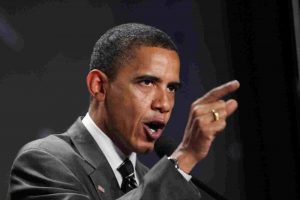 me, Russia, and Iran, your forces and proxies are carrying out these crimes. Your barrel bombs and mortars and airstrikes have allowed the militia in Aleppo to encircle tens of thousands of civilians in your ever-tightening noose. It is your noose. Three Member States of the UN contributing to a noose around civilians. Are you truly incapable of shame? Is there literally nothing that can shame you? Is there no act of barbarism against civilians, no execution of a child that gets under your skin?”

One of the most insidious weaknesses in Leftist ideology is its belief that human beings are primarily good. And because we are basically good, all that is required to bring us to our senses should we misbehave is a little push. Perhaps an appeal to reason. Perhaps the easing of our pain through a little government handout. Perhaps the passing of a law (that keeps mean, nasty and intolerant people at bay, i.e. Christians) or the creation of a safe space where my natural goodness will be given room to breathe and grow. With just a little tweaking here and there – usually by benevolent government policies – our natural goodness will flourish.

And because we are basically good, whenever our natural goodness flourishes, society as a whole will get progressively better. There is a natural flow to history from darkness to light, from slavery to freedom, from poverty to prosperity. The arc of history bends toward justice, as Martin Luther King, Jr. said.

This thinking has informed the entire eight-year Obama administration. And explains why…

It’s not enough to say that President Obama is a weak man when it comes to the world stage, though he is certainly that. It’s that he is a misguided man that is most dangerous. His denial of basic human nature – that there is something primally selfish, even evil about us – is what drives his thinking and decision-making. And after eight years of interacting with the world through this false utopian prism, the world is a much more dangerous and frightening place.

Christians call it “original sin”. Evolutionists say we have yet to evolve past our animal natures. However you slice it, a refusal to see that our hearts are bent to depravity (not bent to justice) empowers the ones who could care less about your morality to plunder and pillage at will. A Putin or a Mullah or a Castro will not respond to reason but to strength. If you are nice to them, they won’t see the error of their ways and be nice back. They’ll steamroll you as far as you allow them.

History might prove me wrong on this, but I can’t help but feel as I watch President-elect Trump fill out his cabinet with generals and business leaders, that after eight years of adolescents running loose in the White House, adults will at last be in charge again. I  hope it is not too late.