The Real Reason The Vikings Lost 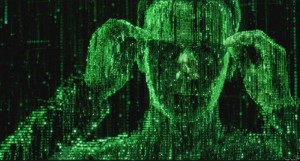 I’ve been watching TV for an hour trying to find a channel, a program, a highlight where Blair Walsh doesn’t shank left a chipshot 27-yard field goal that gives the Vikings a 12-10 win over the Seahawks in the first round of the playoffs yesterday. I can’t find it. But such is life in the Matrix.

Yes, the Matrix. I’ve been trying to convince my family of this for years now. Perhaps at last they will see what is plainly in front of them. And around them. None of this is real.

It’s the only explanation that can possibly make sense of this. I live inside a computer generated reality where evil programmers delight in devising bizarre and novel ways to inflict hurt on me, a fan of both – wait for it – the Iowa Hawkeyes and Minnesota Vikings. Ah, now you begin to understand.

Never mind that I’ve now had my heart ripped out twice in ten days. The Hawkeyes: the slow, steady cancerous death of something you cannot stop. The Vikings: the phone call you never expected. (Sometimes it is hypothetically asked, which one is worse? Never mind, they both suck.)

And if the big games don’t convince you of the truth of it, then how do you explain all the other times when the impossible happens, like a knife between the ribs. Like the first play, the first play! of the Rose Bowl, as I’m removing a strand of cheese that’s drifted silklike against my chin from my first bite, my first bite! of nachos, and Christian McCaffrey rockets untouched 75 yards for a Stanford touchdown. Yeah right. Like that could happen in real life. Prepare for a month to stop one player, and the first time he touches the ball, 11 defenders can’t even touch him.

The shame of this game, compared to the Hawkeye’s Rose Bowl debacle. is that except for three plays, the Vikings outplayed Seattle in what was a vintage game of attrition played in minus zero conditions. When the two lines faced off for each play, it was like a herd of buffalo in Yellowstone, so much steam rose up from the field. (And didn’t seeing crusty old Bud Grant lumber out to midfield in a polo shirt bring an ice cube from your tear ducts?)

Facing that weather, and a monster of a Seattle defense, the Vikings slowly carved out an impressive 9-0 lead by the start of the fourth quarter. But that’s how the Matrix programmers show their cruelty. By luring you in, awakening in even the most hardened cynic whose faith is coarsened with the scar tissue of a thousand cuts – McClanahan’s fumble, Anderson’s miss, Favre’s, Favre’s, What the heck was that? – the thought that maybe this time it will be different. And once you fall for it, once you dare welcome belief into your heart, then they have you. Now they can strap you to the wheel and start pulling on the rope. 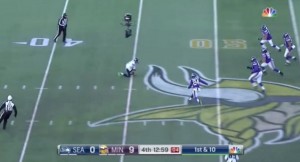 Come on. In real life life, no one gets away from this!

Three plays out of 112 were all the Vikings needed to gag up four hours of hard work: A botched snap that flew past Russell Wilson’s head leading to a touchdown. In the prior series, with the Seahawks pinned to the endzone, the Viking’s defense threw Wilson around like a rag doll in a Rottweiler’s mouth. Yet inexplicably on this play, the Viking defenders became cocker spaniels and Wilson all Harry Houdini, and he finds a Seattle receiver monklike, just him and God, 35 yards down the field. I laughed out loud seeing that. I looked up and winked. Nice one, programmers. I’m so onto you.

An Adrian Peterson fumble leading to a field goal. Of course he fumbled. He was designed that way. Legs of titanium. Fingers of petroleum. Remember New Orleans? The Vikings outgained the Saints 475 yards to 257. And lost. You think that happened in real life? Come on. Figure it out.

And of course, Blair Walsh’s miss leading to infamy. Move over Gary Anderson (who just happened to make every field goal that year except this one. There you go, further proof.)

“Why don’t you just change teams?” my wife asked as I tried to find consolation at the Cheesecake Factory after the game. And I sort of cocked my head to the side and looked at her with a blank stare. Like looking at a child who’s just asked you, “Why do you have to pay for it, Dad? Can’t you just use the credit card?”

You don’t choose teams any more than you choose where you will be born. And I was born in Mason City, Iowa, halfway between Minneapolis and Iowa City. There it is. It’s all decided for you.

But that’s the beauty of all this. Once you’re onto them – the Programmers – they can’t hurt you anymore.

If you’ve awakened this morning and are staring emptily into your oatmeal, and overhead is just a pale, cold January sky, there are two ways you can play this. You can work through the seven steps of grief and trust that the day will come when the memory will slowly lose its sting, then recede enough to where you can bronze it and place it in the Hall of Ignominy alongside all the other bitter exhibits.

But as you do that, I’m warning you. Don’t you see all the empty bays in the exhibit hall waiting yet to be filled?

When will the hurt stop? you ask.  When you stop it! Which you can do this very minute.

Squibbing a 27-yard field goal, that my grandmother could have made, hard left toward Green Bay? You think that really happened? See what I see, my friend. Be free. Laugh again.