The Story Of John Wycliffe

t’s “Bible Week” in my home church of Grace. We’re encouraging our people to read the Bible daily for 15 minutes. If you don’t have a Bible-reading regimen, then we encourage you to read the Gospel of Luke, so that you can watch and hear Jesus up close and in action. Before you turn into bed at night, we also suggest you read a Psalm to calm your heart and mind. For practical advice on life-management, there’s nothing better than the book of Proverbs – it’s great for your bathroom reading, because you can snatch random verses as you do you hair, and whatever else you do in there. During this week, I’ll post daily articles that will show you the importance of building your life on God’s Word, and give you some pointers on how to do it more effectively. Today’s article is an important glimpse back in time. It’s important for us to understand the great price that was paid so that we could even have a Bible at our fingertips.

John Wycliffe was born in the Yorkshire region of England around the year 1330. It is around this time that gunpowder was first used in battle, the mechanical clock was perfected, and the great English writer Chaucer was soon to be born.

Would you long to live in a time when Christianity wasn’t broken up into hundreds of different denominations?  This was it.  This was a time when the only show in town was the Roman Catholic Church – ruled by priests and bishops subject to the all-seeing, all-knowing gaze of the Roman pontiff. This was a day and age when the papacy possessed supreme spiritual power and political power. The nod of the Pope’s head could move armies and cause kings to tremble. This was a day and age when to disagree with the will of the Pope and the teachings of the “Church” meant imprisonment, torture, and death.  Not that many would have reason to disagree, for the Bible – as a matter of policy – was intentionally kept out of the hands and hearts of ordinary believers.

One Catholic writer of Wycliffe’s day wrote of the Bible, “Christ gave His gospel to the clergy and the learned doctors of the Church so that they might give it to the laity and to weaker persons, according to the message of the season and personal need…the pearl of the gospel is not to be thrown before swine and trodden underfoot…The jewel of the clergy is not to be turned into the sport of laity.”  Since the Bible was safely encased in the stone of Latin during this time, it was fairly safe to say that only the clergy could read it. But John Wycliffe set out to change all that.

John Wycliffe studied, and later taught at Oxford University. At the height of his career he was considered the world’s leading theologian and philosopher. He was good friends with John of Gaunt, the second son of King Edward III, and this friendship placed a mantle of protection over Wycliffe when his ideas began making waves in the Catholic world. Wycliffe has been called “the Morning Star of the Reformation”, and with good reason.  Martin Luther wasn’t going to come along for another 150 years, but it could be said that when Luther nailed his 95 theses to the castle door at Wit­tenburg, Wycliffe gave him the hammer. He planted the seeds for many of the ideas that would blossom in the Reformation.

Among his teachings, Wycliffe argued that God gave civil rulers dominion over temporal matters, while giving the Church dominion over spiritual matters. Wycliffe was very uncomfortable with the idea that the Church could wield political power, or accumulate physical property (and nearly a third of England was owned by the Catholic Church in his day!) Naturally, this led to a great deal of corruption in the clergy. Wycliffe came to believe that the papacy was a human invention, created by Constantine not Jesus. And any pope who solicited funds or grasped for money or political power was no vicar of Christ, but a shadow of the antichrist. Toward the end of his life, Wycliffe called for the abolition of the papacy altogether.

This was all too much for the Pope to stomach. He issued several “bulls” against Wycliffe (a “bull” being a formal, written condemnation against heresy). “Wycliffe – this master of errors – has gone to such a pitch of detestable folly, that he feareth not to teach, or rather to vomit out of the filthy dungeon of his breast, certain erroneous and false propositions,” the Pope charged. Wycliffe was summoned to Rome, and he likely would have been burned at the stake except for a fortuitous event, namely the pope dying and a controversy breaking out over who should replace him. So Wycliffe never went to Rome. He was instead confined to a little parish near Oxford, and so, with ample time on his hands, Wycliffe spent the remaining seven years of his life working at the project for which he is famous today – the translation of scripture into the English language.

Wycliffe was grieved by the ignorance of Scripture displayed not only by the common people but by the common clergy. Wycliffe wrote, “Holy Scripture is the preeminent authority for every Christian, and the rule of faith and of all human perfection…Forasmuch as the Bible contains Christ, it contains all that is necessary for salvation, and is necessary for all men, not for priests alone. Christ and His Apostles taught the people in the language best known to them. The laity ought to understand the faith and, as the doctrines of our faith are in the Scriptures, believers should have the scriptures in a language which they fully understand.”  This may seem obvious to us, but back then, these words shook the earth.

Wycliffe had a two-tiered strategy for bringing the Bible to the people. First, he set out to translate the Scriptures into English. Secondly, he personally raised up a distribution network by training a sizeable team of lay 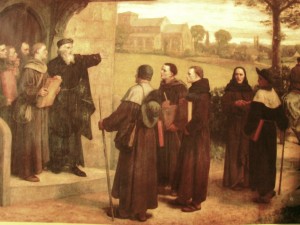 preachers, who dispersed throughout England with handwritten sermons and copies of Wycliffe’s Bible to teach the common people. Wycliffe called them his “poor preachers”. The Catholics called them “Lollards” – a term of derision meaning mumblers. A Catholic historian from Wycliffe’s day wrote: “A man could scarcely meet two people on the road but one of them was a disciple of Wycliffe.”

Wycliffe died suddenly and sadly of a stroke in 1384. His work was carried on by his students and disciples, but a short time afterward, the new pope cracked down on this renegade movement. Wycliffe’s Bibles were banned and burned. It was forbidden to read an English Bible without official approval. And the Lollards were forcefully repressed and many were martyred, including one of his foreign students, a man named John Huss, who carried Wycliffe’s doctrines back to his native Bohemia. He was arrested and burned at the stake, in 1415. But a hundred years later, Huss’ ideas and writing were instrumental in influencing a young German monk named Martin Luther. Luther set the bolder of the Reformation into motion and this time, no Pope could stop it. But without Wycliffe tilling the soil ahead of him, Luther would probably have failed.

As we continue to encourage you to cultivate the habit of daily Bible reading, you should know something of the sacrifice that was made by such men to grant you this privilege. 21st century followers of Christ should each whisper a prayer of thanks to God for this courageous man of faith, the Morningstar of the Reformation, John Wycliffe.